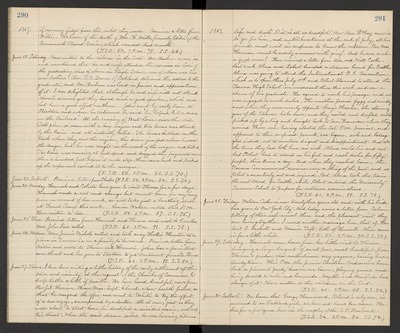 June 22. Saturday. Have written to the children in the East. Mr. Ambrose come in and mentioned that he and wife attended the exercises in Lodi of the graduating class of eleven in High School, one of whom was his son Arthur. Rev. C.R. Brown of Oakland delivered the address to the graduates, and Mr. Ambrose was loud in praises and appreciation of it. I am delighted that although he and wife will not attend church services, yet they heard such a good speaker, which can but have a good effect on them. John went by early train to Stockton and when he returned he said "he helped kill a man on the Railroad." At the crossing of West Lane near the old Cobb place a man with a hay wagon and two horses was struck by the train and all instantly killed. The horses balked on the track when they saw the engine, the driver jumped when he saw the danger, but he was caught in the wreck of the wagon and killed. The train was running at full speed and dragged the fragments more than a hundred feet, before it could stop, then came back and picked up the corpse and carried it to the morgue. (T.S.R. 52. 2 P.M. 81. S.S. 70.)

June 24. Monday. Hannah and Celeste have gone to visit Theresa for a few days. Hannah needs a rest and change but cannot leave for any long time on account of her work, so will take just a breathing spell at French Camp this week. Louise Wallace called this P.M. Have written to Ada. (T.S.R. 52. 2 P.M. 87. S.S. 75.)

June 26. Wednes. Mrs. Jennie Nichols called and took away Hattie Hunter to a place in Sonoma Co. in a family to be reared. Received letter from Willie and wrote to Theresa and Hannah. John has a persistent sore throat and has gone to Stockton to get treatment from Dr. Powell (T.S.R. 60. 2 P.M. 98. S.S. 80.)

June 27. Thurs. I have been writing a little history of the early settlement of this town and vicinity, at the request of the Chamber of Commerce, to help Luther a little if possible. We have heard dreadful news from Rev. J.K. Harrison, Home Miss. Supt. beloved, whose health failed, so that he resigned the office and went to Tahiti to try the effect of a sea voyage, accompanied by a doctor. All at once, just as they were about to start home, he developed a suicidal mama, and cut his throat. When the mail steamer sailed he was hovering between

1907. life death. O it is all so dreadful! Now Rev. DeKay now is to go for him, and until he returns at the end of July, all his friends must wait in suspense to know the outcome. Poor Mrs. Harrison must be near overcome with grief. And he was such a good man! Have received a letter from Ada and Will Cooke. Last week Alma and Robert boarded a steamer bound for Seattle. Alma was going to attend the International C.E. Convention which is to open there July 10th and Robert planned to attend the Tacoma High School Commencement there this week, and see a chum of his graduate. He agreed to work his passage and so was engaged to wash dishes. The weather proved foggy and windy and when they nearly opposite Gray's Harbor, the steering gear of the Steamer broke down, and they sailed and drifted until picked up by a tug and brought back to San Francisco, where they arrived Thurs-eve, having started the Sat. P.M. previous, and appeared to their surprised parents, woe-begone, sick and bedraggled indeed, not to mention disgust and disappointment. And all the time they had both been sea-sick. Alma could lie and rest but Robert had to stand on his feet and wash dishes for fifty people, three times a day. And when they reached home, the Tacoma Commencement exercises were a thing of the past, and so Robert was entirely "out and injured." But Alma took the train the next Mond. for Seattle, while Robert entered the University Summer School, to prepare for entrance examinations. (T.S.R. 62. 2 P.M. 89. S.S. 78.)

June 28. Friday. Weldon Cooke is now twentythree years old and with his bride has gone to New York City. And today comes a letter from Calvin telling of their safe arrival there and the pleasant visit they are having together. I record another marriage here, that of Herbert S. Gaskell and Mamie Taft, both of Clements. Alice came in for a little while. (T.S.R. 53. 2 P.M. 90. S.S. 78.)

June 29. Saturday. Hannah came home from her little visit to Theresa, bringing a large bouquet of sweet peas, most beautiful, from Theresa's garden, also nasturtiums, very gorgeous, having had a lovely time. This P.M. the Junior Christian Endeavorers have had a pleasant party here on our lawn, playing games and being treated to cake and lemonade. Myrtle and Winifred had charge of it. Have written to the children in the East. (T.S.R. 60. 2 P.M. 88. S.S. 72.)