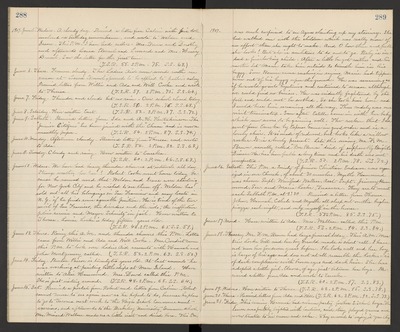 1907. June 5. Wednes. A cloudy day. Received a letter from Calvin with five dolls. enclosed a birthday remembrance, and wrote to Weldon and Irene. This P.M. I have had callers. Mrs. Bower and Dorothy and afterward's Laura bruml and Leonard and Mrs. Henry Bruml. Saw the latter for the first time. (T.S.R. 55. 2P.M. 75. S.S. 63.)

June 5. Thurs. Forenoon cloudy. The Ladies Aid were served with ice cream at Laura Bruml proceeds to be applied to pastor's salary Received letters from Willie and Ada and Will Cooke and wrote to Theresa. (T.S.R. 59. 2P.M. 75. S.S. 64.)

June 12. Wednes. We have had heavy thunder showers at intervals all day. Strange weather for June! Robert Cooke went home today because he received word that Weldon and Irene were starting for. New York City and he wished to see them off. Weldon has sold out all his belongings in San Francisco and may locate in N.Y. if he finds some agreeable position. He is tired of the turmoil of San Francisco, the disorders and the riots, the ineffective police service and Mayor Schmitz in jail. Have written to Theresa. Louise Locke is today fifteen years old. (T.S.R. 48. 2P.M. 65. S.S. 59.)

June 14. Friday. Benton Pascoe is twenty two years old. At last accounts he was working at painting battle ships at Mare Island. Have written to Alice Hammond. Mrs. Dowd called this P.M. She is just visiting around. (T.S.R. 48. 2P.M. 68. S.S. 64.)

June 15. Sat. Received a postal from Robert and letter from Calvin. Robert cannot come to us again now as he hoped to do, because he plans to go to Tacoma next week to the High School Commencement exercises, and afterwards to the Berkeley University Summer school. Mrs. Minard Wallace made us a little visit and dined here. This P.M.

1907. was much surprised to see Agnes climbing up my stairway. She had walked over with the children which was really more of one effort than she ought to make. And O how thin and feeble she looks! But she is ambitions to do and to go. Baby is indeed a fine looking child. After a little he got restless and his mother let Marie take him outside to trundle him in his buggy. Soon Bernice came rushing in saying Marie had tipped him out of his buggy upon the ground. He was screaming as if he would go into hysterias and continued to scream although we could find no bruises. He was evidently frightened by the fall and could not be soothed. So she took him home and I could hear him screaming all the way. Thus rudely was our visit terminated. Soon after Estelle came in with her baby which now seems to be gaining well. The rocker that Ida sent from Eureka by Express came in good order and is a lovely chair. It is made of redwood but looks like a willow rocker. It is a lovely present. Late this evening, Mr. F. M. Brown usually called "Doc Brown" died of supposably Brights Diseases He has been feeble a long time and his death was not unexpected. (T.S.R. 50. 2P.M. 78. S.S. 72.)

June 16. Sabbath. This P.M. a Society of Junior Christian Endeavor was organized in our Church, of about 30 members, Myrtle Hammond was chosen Supt. Winifred Wallace, Asst Supt. Jimmy Hammond, Sec. and Marie Locke Treasurer. They are to meet each Sabbath P.M. at 2:30 Received a letter from Theresa. John, Hannah, Celeste and Myrtle all sleep out on the higher piazza each night, and only myself in the house. (T.S.R. 53. 2P.M. 85. S.S. 75.)

June 18. Tuesday. Mr. F.M. Brown had large funeral today. This A.M. Mertice Locke Gill and her boy Gerould made a short call. I have not seen her for seven years before. She looks well and her boy is large of his age and does not at all resemble the Lockes, is of dark complexion with brown eyes and dark hair, She has Adopted a little girl, Elnora, of age just between her boys. Received a letter from Ada and wrote to Eureka. (T.S.R. 60. 2P.M. 97. S.S. 83.)

June 21. Friday. This evening Hannah had a lawn party for her S. School boys. The lawn was prettily lighted with lanterns, and they played games and were treated to ice cream and cake. They seemed to enjoy it greatly