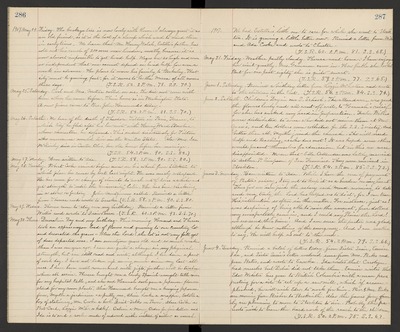 1907. May 24. Friday. The buckeye tree is now lovely with bloom. I always greet it as an old friend, as it is the last of a clump which used to stand there in early times. We learn that Mr. Henry Walsh, Estelle's father, has sold out his ranch of 200 acres near Linden, mostly because it is now almost impossible to get hired help. Wages are so high and men so independent that one cannot depend on hired help for even a week in advance. He plans to move his family to Berkeley. That city must be growing fast, for it seems to be the Mecca of all movers these days. (T.S.R. 52. 2 P.M. 78. S.S. 70.)

May 26. Sabbath. We hear of the death of Theodore Tilton in Paris, France, to which City he fled after his law suit with Henry Ward Beecher whose character he defamed. This ended disastrously for Tilton who nevermore would live in the United Sates. Also Mrs. Ida McKinley died in Canton, Ohio. her old home before her marriage. (T.S.R. 54. 2 P.M. 90. S.S. 82.)

May 28. Tuesday. Robert Cooke arrived before noon on his wheel from Stockton to which place he came by boat last night. He was nearly collapsed. He has come for a changed of climate to work out of doors awhile and get strength to enter the University later. He has been clerking in a store or factory John Montgomery called. Received a letter from Theresa and wrote to Eureka (T.S.R. 58. 2 P.M. 90. S.S. 80.)

May 30. Thurs. Decoration Day and my birthday. This morning Howard and Theresa took an express wagon load of flowers and greenery to our cemetery lot and decorated the graves. Bless the Lord! the lot is not very full yet of dear departed ones. I am seventyone years old and so much weakes than I was one year ago. I can see quite a change in my physical strength, but can still read and write, although I lie down a part of each day. I have not taken up sewing much since my last illness. I have been well remembered with gifts, for there will be twelve when all arrive. Theresa brought me a loody Spanish wrought table cover for my hospital table, and she and Hannah each gave a Japanese flower stand for my room plants, Alice Hammond brought me a hanging Japanese fern, Myrtle a jardiniere, a pretty one, Alice Locke a wrapper, Estelle a box of stationery, Mr. Cooke a book "Quiet Talks on Power", Alma Cooke a Post Card, Lizzie McL. a half. Calvin a Money Order for five dollars and Ida is to send a rocker made of redwood with instead of willow as usual.

June 2. Sabbath. Children's Day in our S. School. The attendance was good the flowers lovely and all went off well, to Hannah's relief for she has worked very hard in preparation. Twelve Bibles were distributed to some who did not received them at New Year's, and ten dollars were collected for the S.S. Society. And better than all, Myrtle joined the church. She will need help and teaching, as who does not? It was hoped some others would present themselves for admission, but in this we were disappointed. We see that Ella Ostrander was lately married to Arthur P. Simpson of San Francisco. They were married in Stockton. (T.S.R. 54. 2 P.M. 85. S.S. 72.)

June 3. Monday. Have written to Ada. While I have the care of payment of Pastor's salary, I try not to keep it as a burden on my heart. Thus far we have paid the salary each Mond. morning to date and very truly the Lord has helped us to do it, for I can trace His intervention so often in the matter. For instance, just as I was despairing of being able to raise the amount, four dollars very unexpectedly came in, and I could say. Praise the Lord! we are saved this time! And I am sure the pastor was glad, although he knew nothing of the emergency. And I am enabled to say, He will help no out to the end. (T.S.R. 54. 2 P.M. 79. S.S. 66.)

June 4. Tuesday. Received a batch of letters today, from Sister Susie, Eunice Ida, and Sister Susie's letter enclosed some from Mrs. Perks and Joan Bates, and wrote to Eureka. Ida writes that Carolyn had measles but Delia did not take them. Eunice writes that Edw. Webster has gone to British Columbia with a man prospecting for a site to set up a saw mill, which if accomplished, he will wish Edw, to work for him. Rev. & Mrs. Perks are moving from Briber to Beckwith. Also the James Jory family are planning to move to Stockton to live. Probably the parents wish to leave the hard work of the ranch to the children (T.S.R. 50. 2 P.M. 75. S.S. 63.