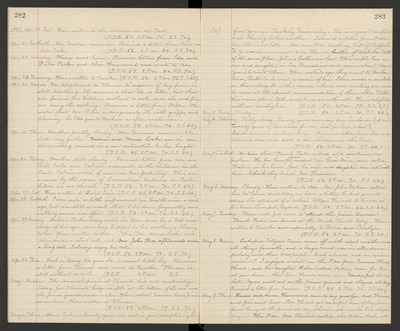 Apr. 24. Wednes. We telephoned to Theresa to inquire if hay fever is still troubling. She answered that she is better, but that she found her kitchen without a cook, and she and Jim are doing the cooking. Received a letter from Willie. He writes that Mr. Ober is dangerously ill with grippe and pleurisy. So Etta goes to Nashua as often as she can. (T.S.R. 52. 2 P.M. 74. S.S. 60.)

Apr. 26. Friday. Weather still cloudy. Received letters from Ada and will Cooke and Calvin, and wrote to the children in the East. Calvin writes of snow in New York City. This eve a man by the name of Leonard son lectured on Prohibition in our church. (T.S.R. 52. 2 P.M. 70. S.S. 60.)

Apr. 29. Monday. Webster Parker today enters his teens, and he is tall and large of his age, and very helpful to his mother, a blessing to her. Have written to Ada. This P.M. Maud Locke and Alice made a short call and Mrs. John Kerr afterwards made a long call. I always enjoy her calls. (T.S.R. 52. 2 P.M. 78. S.S. 70.)

Apr. 30. Tues. Niel is today ten years old, a smart little boy. Received a letter from Theresa and wrote to Eureka. Theresa is still without a cook. (T.S.R. 2 P.M. S.S.

May 1. Wednes. The Annual picnic at Clements did not materialize today, for Clements bridge is still "at the bottom of the sea" and the picnic grounds under water. Their school however has a picnic somewhere. Have written to Theresa. (T.S.R. 49. 2 P.M. 79. S.S. 70.)

May 2. Thurs. Alma Cooke is twenty years old and is just completing her

1907. first year in Berkeley University. She is a great comfort and blessing to her mother. Received a letter from Willie. Mr. Ober is no better. Mr. and Mrs. Anthony Batt of Buffalo, N.Y. arrived on a visit to us. He is a brother of Nicholas Batt of the same place, John's brother in law. This couple has a son and daughter in San Bernardino and came about New Year's to visit them. Then awhile ago they went to Forbes town, Butte Co. to visit a cousin of his. I have made a mistake in this writing. It is this cousin who is now visiting us, and he came at the special recommendation of these other Batts. His name also is Batt, and he is an asthmatic. He is delighted with our country here. (T.S.R. 50. 2 P.M. 79. S.S. 67.)

May 4. Saturday. Partly cloudy. Twenty years since my dear husband left us. Twenty years of loneliness for me, but for him, what? Estelle came in without baby. Received letters from Ida and Will and Ada and wrote to the children in the East. (T.S.R. 50. 2 P.M. 70. S.S. 64.)

May 5. Sabbath. We hear that Frank Foster is dead at a sanitarium in Jackson. He has been for years resident in Gwin Mine, now called Fosteria in his Honor. But his wife and daughter were not with him. I think they live in San Francisco. (T.S.R. 50. 2 P.M. 70. S.S. 60.)

May 7. Tuesday. Theresa and Jim came to attend the picnic tomorrow. Frank Foster was buried at the Brick Church today. Have written to Eureka, and especially to Delia and Carolyn. (T.S.R. 52. 2 P.M. 70. S.S. 62.)

May 8. Wednes. Lockeford Citizens Picnic came off with ideal weather and all things favorable, and a large crowd was in attendance probably more than 3000 people. Such a crowd an no serious accident! I enjoyed a visit in the P.M. from Emma (Kerr) Hurd, and her daughter Helen (called Nellie) came for her at sun down. Also Bro. Horace came in. Wonderful to relate, Agnes went out on the picnic ground and stayed all day Received a letter from Eunice. (T.S.R. 49. 2 P.M. 75. S.S. 64.)

May 9. Thurs. Horace and Anna Hammond came to say goodbye. And Theresa and Jim went home. Poor Theresa got an awful dose of hay fever from being at the picnic all day, otherwise she would have stayed longer. This P.M. Mrs. Clements called, also Nellie Locke, who