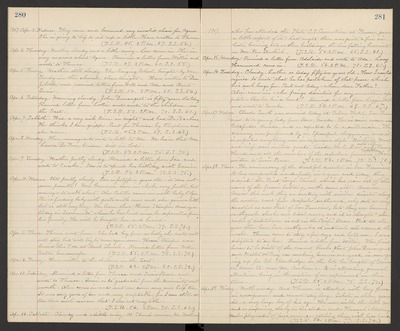 Apr. 10. Wednes. Still partly cloudy. Ida is fortyfive years old it does not seem possible! Mrs. Gammon came in, looks very feeble, but manages to walk about. Also Estelle came in with baby Olga. She is feeding baby with goats milk now and she gains a little but is still very tiny. We learn that Hosea Stamper died yesterday in Sacramento, where he has lived since he separated from his family. He will be brought here and buried. (T.S.R. 55. 2 P.M. 79. S.S. 71.)

Apr. 13. Saturday. Received a letter from Theresa and Susie Pascoe and wrote to Theresa. Susie is to graduate from the University next month. Alice came in and sent me some very nice beef tea. It was very good of her and very acceptable, for I am still so troubled with nausea that I can eat very little. (T.S.R. 56. 2 P.M. 70. S.S. 62.)

Apr. 16. Tuesday. Cloudy. Luther is today fiftyone years old. How I would rejoice to write that he has partaken of that peace which his soul longs for. But not today when, dear Father? Alice came in, she frings dainties for my uncertain appetite, bless her kind heart! Received a letter from Lizzie Mt. and wrote to Eureka. (T.S.R. 50. 2 P.M. 69. S.S. 67.)

Apr. 17. Wednes. Claude Smith was married today at Palace Hotel, San Francisco, to a young today from Rens, Nevada. He is mine owner in Gold fields, Nevada, and is reputed to be a millionaire. The ceremony was performed by an Episcopal clergyman and it is reported everything was in expensive style. Winfield Mont. and wife were invited guests besides M.C. Dow and wife and Fanny Hurd, and all the members of the respective families relatives. Have written to Susie Pascoe. (T.S.R. 52. 2 P.M. 75. S.S. 70.)

Apr. 18. Thurs. The anniversary of the dread ful disaster in San Francisco. It has recuperated wonderfully in a year and today they dedicate the First Congl. Church which has risen out of the ruins of the former building, on the same site. And in Mexico this week they are meeting with similar disaster along the western coast from Acapulco southward, only not so very dreadful as was that of San Francisco, but they are having earthquake shocks and tidal waves, and it is thought the center of disturbance is out in the Pacific Ocean. But all the year there have been earthquakes at intervals all around the world. Theresa came to stay a few days and help me. I was delighted to see her. Received a letter from Willie. The first house to be built of the cement blocks that John Demange at and Walter McGary are making here in our yard, is now going up for Sol Strowbridge on the lots he bought of Eunice on Main St. near Mr. Ambrose's. It is attracting general attention, being in the nature of an experiment in this town. (T.S.R. 55. 2 P.M. 75. S.S. 72.)

Apr. 19. Friday. North windy. And Theresa is attacked with hay fever in consequence and cannot stay long. Celeste is eleven years old, a very large boy of his age. He now milks the little cow and is improving slowly in his studies sender Hannah's teaching Makes playmates of frogs, mice, D.C. catching them with bare hands (T.S.R. 56. 2 P.M. 77. S.S. 74.)