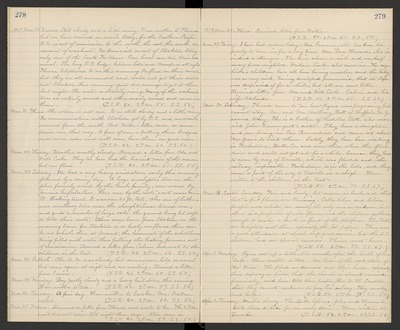 1907. Mar. 20. Wednes. Still cloudy and a little rainy. Have written to Theresa but we have received no mails today, for the Southern Pacific R.R. is out of commission to the north, the east, the south, on account of washouts. No trains into or out of Stockton today only one of the Santa Fe trains. Our local ran two trains as usual. The long R.R. bridge between Lodi and Ocampo is all right Theresa telephoned to us this morning. No flood on their ranch but they are all surrounded and could not get their milk into Stockton this morning just did manage to get it there last night. The water is steadily rising. Many of the orchard trees are entirely covered and others nearly covered and some in bloom. (T.S.R. 50. 2P.M. 55. S.S. 52.)

Mar. 21. Thurs. The storm is not over. It is still cloudy and a little rainy. No communication with Stockton yet by R.R. and no mails received from the south. But Willie's letter came so some trains run that way. A force of men is putting these bridges near us in order and will soon have them in good order. (T.S.R. 42. 2P.M. 60. S.S. 50.)

Mar. 23. Saturday. We had a very heavy wind storm early this morning followed by a rainy day. A large eucalyptus tree on the place formerly owned by the Grubs family, now owned by Jimmie Garfield Kerr. blew over by the roots, went across Main St. Blocking travel. It was over 60 ft. tall. Also one of Luther's ince mulberry trees near the slaughter house turned over, and quite a number of large oaks, the ground being too soft to hold their roots. Alma came home from Stockton on the morning train, for Stockton is so badly over flowed there can be no schools there at present, the basements of the school houses being filled with water thus putting the heating furnaces out of commission. Received a letter from Calvin and wrote to the children in the East. (T.S.R. 48. 2P.M. 56. S.S. 50.)

Mar. 29. Friday. I have callers today. Mrs. Gammon, who has been too poorly to come in for a long time, Mrs. Dan Howard, who is indeed a stranger. She lives alone, a mile and one half away from neighbors. Wallace Locke also came in. He says Lilla's children have all been having measles, and the baby was so very sick, having developed pneumonia, that its life was despaired of for a while, but all are now better. Received letters from Ada and Will Cooke. Calvin and his wife Adelaide. (T.S.R. 40. 2 P.M. 68. S.S. 62.)

Mar. 30. Saturday. Theresa came to see how Agnes was progressing but cannot stay. Mr. and Mrs. Anthony Batt of Buffalo. N.Y. arrived today. He is a brother of Nicholas Batt, who married John Demangcot's sister. They have a daughter and son living in San Bernardino and carne out about New Year's to visit them. Lately they have been visiting in Forbestown, Butte Co. and were there when the flood came and could not get out for a while, because they had to come by way of Oroville, which was flooded and the railway impassable. Forbestown is in the hills, and they came a part of the way to Orville in a sleigh. Have written to the children in the East. (T.S.R. 45. 2 P.M. 70. S.S. 67.)

Mar. 31. Easter Sunday. Fair and lovely, but season so backward that but a few flowers are blooming. Calla lilies and lilacs, purple and white, are nearly the only ones in evidence, but there jis a profusion of wild flowers, and the children gathered enough to make a bank in front of the platform. The Batts an delighted with them, especially the Cal. poppies. There was a good attendance at church and good music, but the S.S. children had no special exercises. Theresa went home. (T.S.R. 51. 2 P.M. 73. S.S. 67.)

Apr. 1. Monday. Agnes sat up a little, two months after the birth of her babe. Have written to Ada. We hear of the sad state of Rio Vista. The flood so drowned out their lands, especially their asparagus fields, that the church is almost ruined financially, and have told their pastor, Rev. W.H. Scudder, that they cannot continue to pay his salary. They surely need help. (T.S.R. 50. 2 P.M. 73. S.S. 63.)