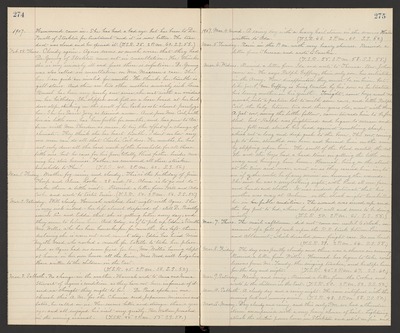 Feb. 28. Thurs. Cloudy again. Agnes seems so much worse that they had Dr. Young of Stockton come out in consultation. He thinks she is very seriously ill and fears there is infection. Dr. Young was also called in consultation on Mrs. Marceau's case. She has been quite an invalid for months. He thinks her trouble is galt stones. And there are two other mothers seriously sick. Laura Bruml has been very poorly ever since she met with an accident on her birthday. She slipped and fell on a loose board at her back door step, striking on the small of her back so as to almost paralyze her. She has Susie Jory as trained nurse. And poor Mrs. Coil, with her six little ones, has been feeble for months, and has gone to Altburn with Mrs. Sherden as nurse, to try the effect of a change of climate. They think she has heart trouble. I dont see how any one man can do all that Charlie Coil does. For months, he has not only done all the hard work of the household for all those little ones but he cares for his poor, totally blind father besides running his store business. Father, we commend all these stricken households to Thee! (T.S.R. 40. 2 P.M. 62. S.S. 56.)

Mar. 2. Saturday. Still cloudy. Hannah watched last night with Agnes. She is very sick indeed her life almost despaired of still Dr. Priestley assures her and Eddie that she is getting better every day, and they seem to believe him. And today, as if to pile up Eddie's trouble Mrs. Willis, who has been housekeeper for months, has left them declaring she is worn out and cannot stay. Eddie has hired Miss Myrtle Wood, who worked a month for Estelle to take her place. And as Agnes had no room fixed for her, Mrs. Willis having slept at home in her own house all the time, Miss Wood will lodge here. Have written to the children in the East. (T.S.R. 45. 2 P.M. 58. S.S. 53.)

Mar. 3. Sabbath. No change in the weather. Hannah wrote to Anna and hema Stewart of Agnes's condition as they have not been informed of it and we thought they ought to be. Dr. Pond spoke in our church this A.M. for the Chinese and Japanese Missions and later, he called on us. He seems better and stronger than a year ago, and all enjoyed his visit very greatly. Rev. Wallace preached in the evening as usual. (T.S.R. 45. 2 P.M. 55. S.S. 50.)

Mar. 6. Wednes. Received a letter from Ida and wrote to Theresa. Bro. John came in. He says Ralp Geffroy, their only son, has enlisted in the Army. How disappointed they must be in him, but, like Jacob, mr. Geffroy is being treated by his son as he treated his loving mother in his youth. Tonight, some boys went as usual, mits a pasture lot to milk some cows, and little Ralph Coil, the baby, between two and three years old, went with them A pet cow, seeing the little fellow, came towards him to be fondled, but Ralph was frightened and began to scream and run, fell and struck his head against something sharp, which cut a long and deep gash to the bone. The cow, coming up to him, stumbled over him and bruised him on the arm by stepping upon him. The smell of the blood excited the cat the and the boys had a hard time in getting the little one away and bringing him home. Hannah, being on the street at the time and near, went in as they carried him in, to see if she could be of any service in dressing the wounds. She said he was a sorry looking sight, with blood all over face and hands and clothes. It was indeed fortunate that his mother was away at Auburn or the shock might have killed her in her feeble condition. The wound was seemed up and the boy put to bed, where he slept well and seems to be doing nicely. (T.S.R. 50. 2 P.M. 61. S.S. 55.)

Mar. 8. Friday The day was partly cloudy and there was a shower in evening. Received a letter from Willie. Hannah has begun to take vocal lessons from Ms. Tandy, the singing teacher, and he stops here for the day and night. (T.S.R. 45. 2 P.M. 67. S.S. 60.)

Mar. 11. Monday. Day cloudy and rainy, and this early P.M. we had a thunder storm accompanied with a very heavy shower of hail. Lightning struck the electric power house in Stockton and set it on fire and