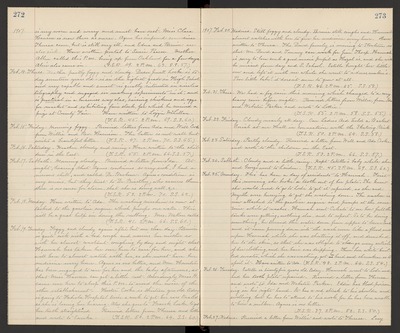 1907. is very worn and weary and must have rest. Miss Clara Hansen is now there as nurse. Agnes has improved some since Theresa came, but is still very ill, and Edna and Bernice are also sick. Have written postal to Susie Pascoe. Mother Allen called this P.M. being up from Oakland for a few days, Alice also came in. (T.S.R. 49. 2 P.M. 63. S.S. 57.)

Feb. 14. Thurs. Weather partly foggy and cloudy. Dean Jewett Locke is to day seventeen years old - is in the highest grade in High School and very capable and smart is greatly interested in wireless telegraphy and engaged in making experiments in it, and is practical in a business way also, raising chickens and eggs for market and exhibiting fine stock, for which he received a prize at County Fair. Have written to Lizzie McLellan. (T.S.R. 45. 2 P.M. 69. S.S. 60.)

Feb. 17. Sabbath. Morning cloudy. Received a letter from Ida. At night, hearing that Agnes continues so very sick. I had a nervous chill, and called Dr. Barbour. Agnes's condition is very serious, but they trust to Dr. Priestley, who assures them. there is no cause for alarm, that she is doing well, x.c. (T.S.R. 53. 2 P.M. 70. S.S. 62.)

Feb. 19. Tuesday. Foggy and cloudy again after but one clear day. Bernice is quite sick with a bad cough and worries her mother so with her almost constant coughing by day and night that Hannah has taken her over here to care for her, and she will have to almost watch with her, as she must have her medicine every hour. Agnes is no better, and Mrs. Hunter has been engaged to care for her and the baby afternoons, so that Miss Hansen can get a little rest. Accordingly Miss H. came over here to sleep this P.M. to avoid the noise of the other establishment. Hester Cooke is thirteen yrs. old today is going to Fabiola Hospital twice a week to get her ears treated as she is losing her hearing. Also she goes to Frank Locke to get her teeth straightened Received letters from Theresa and Lottie and wrote to Eureka. (T.S.R. 50. 2 P.M. 64. S.S. 60.)

1907. Feb. 20. Wednes. Still foggy and cloudy. Bernice still coughs and Hannah almost watches with her to give her medicine every hour. Have written to Theresa. The Down family is moving to Stockton so that Mr. Dowd and Tommy can work for Jim Thorp. Hannah is sorry to lose such a good music pupil as Hazel is, and she will be missed from day and S. School. Estelle brought her little one and left it with me while she went to a dressmaker's. Poor little babe! it doesn't seem to grow at all. (T.S.R. 46. 2P.M. 65. S.S. 58.)

Feb. 25. Monday. This has been a day of accidents to Hannah. First this morning she broke a tooth out of her plate. She knew she would need to go to Lodi to get it repaired so she and Myrtle were hurrying to get the washing done. The washes is now attached to the gasoline engine and pumps at the same time while it washes. Hannah sent Celeste to see how full the tanks were getting, nothing else, and to report. So to be doing something, he turned the water down from upper to lower tank and it came pouring down into the wash room like a flood and upon Hannah while she was shutling it off, and drenched her to the skin, so that she was obliged to change every article of her clothing, and her hair was dripping. Then her while knitted sweater, which she was washing, got so hard and shrunken as to spoil it. Have written to Ada. (T.S.R. 48. 2P.M. 64. S.S. 54.)

Feb. 26. Tuesday. Estelle is twenty five years old today. Hannah went to Lodi and had her tooth plate repaired. Received a letter from Theresa and wrote to Ida and Webster Parker. Eddie has blood poisoning in his right hand. It has a red streak to his shoulder and swelling, but he has to attend to his work, for he has been unable to hire a milker. Agnes is no better. (T.S.R. 37. 2P.M. 52. S.S. 50.)

Feb. 27. Wednes. Received a letter from Willie and wrote to Theresa. Lucy