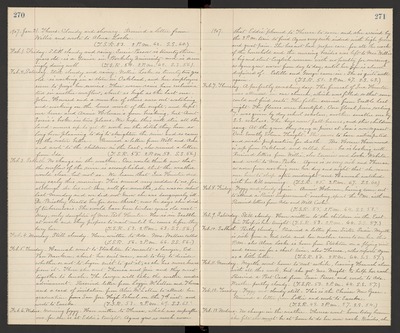 Feb. 2. Saturday. Still cloudy and rainy. Nellie Locke is twenty two yrs old is working in a store in Oakland, and her employers seem to prize her services. These warm rains have culminated in another over flow, about as high as the last one. John, Howard and a number of others were out watching and working on the leoces most of the night, and kept our levee and Annie Holman's from breaking, but Aunt Susie's broke in two places. We hope this will stir all the land owners up to get to work on the ditch they have so long been planning to dig to straighten the river and so carry off the water better. Received a letter from Will and Ada and wrote to the children in the East, also received a letter from Ida. (T.S.R. 55. 2 P.M. 58. S.S. 56.)

Feb. 3. Sabbath No changed in the weather. One would think now that the overflow of the river is accomplished, that the weather would clear, but not so. We learn that Ina Hunter died very early this morning. This seemed very sudden to us, for although she has not been well for months, she was in school last Monday and we did not know she was dangerously ill. Dr. Priestley treated her for sore throat, now he says she died of tuberculosis. She would have been twelve years old next May, only daughter of Mrs. Bob Hunter. He is in Seattle at work and they purpose to wait until he comes before they bury her. (T.S.R. 53. 2 P.M. 63. S.S. 56.)

Feb. 5. Tuesday. Hannah went to Stockton to consult a lawyer, Ed. Van Manken, about her suit case, and to try to decide whether or not to begin suit to get it, as she has never heard from it. There she met Theresa and Jim and they went together to lunch. The lawyer will take the matter under advisement. Received letter from Lizzie McLellan and Theresa and a card of invitation from Alice McLellan to attend her graduation from San Jose High School on the 7th inst. and wrote to Eureka. (T.S.R. 53. 2 P.M. 69. S.S. 63.)

Feb. 6. Wednes. Morning foggy. Have written to Theresa, which was superfluous, for she is at Eddie's tonight. Agnes grew so much worse

1907. that Eddie phoned to Theresa to come and she arrived by the 2 P.M. train to find Agnes very sick indeed with high fever and great pain. She has not had proper care for all the work of the household and the nursing besides was left to Mrs. Willis a big and stout English woman with no faculty for nursing, so Agnes grew worse from day to day, until her fife is almost despaired of. Estelle and George came in. She is quite well again. (T.S.R. 51. 2 P.M. 67. S.S. 63.)

Feb. 7. Thursday. A perfectly sunshiny day. The funeral of Ina Hunter was attended in our church, which was filled so that some could not find seats. The father arrived from Seattle last night. The flowers were beautiful. One floral piece, costing $7. was given by day school scholars, another smaller one by S.S. Scholars. The boys were pall bearers, and thew children song. At the grave they sang a piece at Ina's own request "One Sweetly Solemn Thought. She seems to have anticipated and made preparation for death. Bro. Horace Hannah is up from Oakland and called here, he is looking well. Received letters from Willie, also Eunice and Locke Webster and wrote to Mrs. Perks. Agnes is so very sick and Theresa so worn from working over her day and night that she came over here to sleep after midnight and Hannah watched with her till morning. (T.S.R. 45. 2 P.M. 67. S.S. 60.)

Feb. 10. Sabbath. Party cloudy. Received a letter from Sister Susie. Myrtle is sick from a bad cold and her mother came to see her this P.M. also Alma Locke is home from Stockton on a Flying visit and came in for a short time, also Theresa, who reports Agnes as a little better. (T.S.R. 50. 2 P.M. 64. S.S. 57.)

Feb. 13. Wednes. No change in the weather. Theresa went home today because she felt she must be at home to do her own work. Besides. she