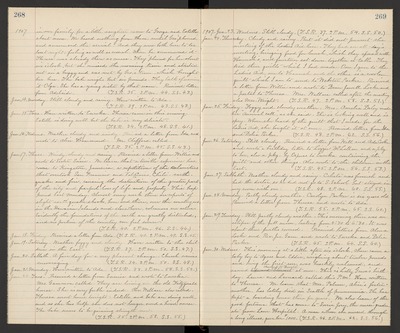 1907. in our family for a little daughter came to George and Estelle about noon. We heard nothing from them until Geo. phoned and announced the arrival. And they were both here to tea last night, feeling as well as usual. When he announced it Theresa was already there as nurse. They phoned for her about six o'clock but she missed the morning train and started out in a buggy and was met by Geo's team, which brought her here. The babe weighs but six pounds. They talk of naming it Olga. She has a young sister by that name. Received letter from Adelaide. (T.S.R. 35. 2 P.M. 44. S.S. 43.)

Jan. 17. Thurs. Windy, cloudy and rainy. Received a letter from Willie and wrote to Sister Susie. We learn that a terrible experience has come to Kingston, Jamaica, a repetition of the calamities that overtook San Francisco and Valpraiso, Chili earthquake and fire, causing the distinction of the greater part of the city and fearful loss of life and property. This happened last Monday. Almost every week there are reports of slight earthquake shocks, here and there, over the country and in the Hawaian Islands and elsewhere, volcanoes are active. Evidently the foundations of the earth are greatly disturbed, and no portion of the country can feel secure. (T.S.R. 40. 2 P.M. 46. S.S. 44.)

Jan. 22. Tues. Received a letter from Eunice and wrote to Eureka. Mrs. Gammon called. They are living in the old Fitzgerald house. She is very feeble indeed. Rev. Wallace also called. Theresa went home tonight. Estelle and babe are doing well, and as she has help she does not longer need a hired nurse. The babe seems to be gaining strength now. (T.S.R. 35. 2 P.M. 58. S.S. 55.)

Jan. 24. Thursday. Cloudy and rainy. But it did not prevent the meeting of the Ladies Aid here. They had an all day's meeting, bringing food for lunch, which they spread with Hannah's, and fourteen sat down together at table. They tied three quilts which I had made. One I gave to the Ladies Aid, one to Hannah and the other is a woolen quilt which I am to send to Webster Parker. Received a letter from Willie and wrote to Dean Jewett Locke and a postal to Theresa. Mrs. Wallace called after the meeting also Mrs. Wright. (T.S.R. 47. 2 P.M. 58. S.S. 51.)

Jan. 26. Saturday. Still cloudy. Received a letter from Will and Ada Cooke and wrote a birthday letter to Lizzie McLellan and a pkg. to her, also a pkg. by Express to Eureka containing the quilt and other things. Also wrote to the children in the East. (T.S.R. 45. 2 P.M. 56. S.S. 53.)

Jan. 30. Wednes. This morning at a little after six o'clock, there came a baby boy to Agnes and Eddie, weighing about twelve pounds and being the first son, was heartily welcomed, and named changed to Donald at once. This is Lilly Greve's birthday. Laura and Leonard called this P.M. Have written to Theresa. We learn that Mrs. Palmer, Alice's foster mother, has lately died in Seattle of pneumonia. She has kept a boarding house there for years. We also learn of the good fortune that has come to Susie Jory, the nurse graduate from Lane Hospital. A man whom she nursed through a long illness, gave $1000. (T.S.R. 46. 2 P.M. 62. S.S. 56.)