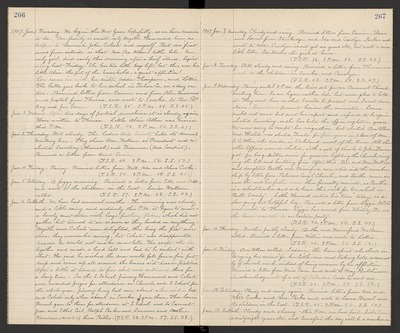 1907. Jan. 1. Tuesday. We begin the New Year hopefully, as we have reason to do. Our family is small, only Myrtle Hammond here as helper to Hanna, John, Celeste and myself. But our first news from outside is that Mrs. Ora Allen's little babe, her only girl, died early this morning after a brief illness, beginning last Friday. She has two little boys left, but this was here little Alice, the pet of the household, a great affliction! Lou came in with her sister, Addie Thompson, and Lottie. The latter goes back to her school in Tulare Co. in a day or two. Received letters from Eunice and from Alice Hammond and postal from Theresa, and wrote to Eureka, to Rev. Dekay and Jee Gam. (T.S.R. 35. 2 P.M. 49. S.S. 45.)

Jan. 6. Sabbath. We have had unusual weather. The morning was cloudy and a little rainy and suddenly this P.M. it began to snow a lovely snow storm with large feathery flakes, which did not gather but turned to ice as soon as they landed on anything. Myrtle and Celeste were delighted, this being the first snow storm, they remember seeing, but Celeste was disappointed because he could not make snow balls. He swept the ice together and made a hard ball and had to be content with that. He said he wished the snow would fall four or five feet deep and "come up all around the houses as it does in pictures". After a little it turned to fine slect and continued thus for a long time. In the S. School Jimmy Hammond and Celeste were awarded prizes for attendance on Church and S. School for the whole year. Jimmy being but once absent when sick in bed and Celeste only when absent in Eureka. I gave these. Then Laura Bruml gave to them for attendance at S. School and to Earnest, Jesse and Ethel Coil. Ralph Parker and Lawrence and Arthur Knudsen, most of them Bibles. (T.S.R. 32. 2 P.M. 37. S.S. 38.)

Jan. 9. Wednesday. Rainy until 2 P.M. the time set for our Annual Church Meeting here. So we began rather late but were glad to hold it. They met here so that I could be present and I went down stairs. Seven were present besides the minister. Laura could not come but sent here report and refused to be again elected Secretary, as she has held the office eighteen years. We were sorry to accept her resignation but elected Ora Allen. Mrs. Hatch was elected Trustee for five years in place of Mrs. E. C. Allen, who resides in Oakland most of the time. All the other Officers were re-elected, with a vote of thanks to John Demangeot for his gratuitous service for years in lighting the Church, ringing the bell and building fires. After this, Rev. and Mrs. Wallace and daughters Bertha and Winnifred were voted into the membership by letter from Palermo Cong'l Church, and Bertha came in and she and her father were then formally received, as Bertha is a school teacher and is to leave this week for her school in Butte County. Little Howard enters his "teens' today, is a slow going but helpful boy. Received a letter from Lizzie McL. and wrote to Theresa. Lizzie has moved from Whitney St. as the house was sold to an Eastern party. (T.S.R. 46. 2 P.M. 50. S.S. 49.)

Jan. 11. Friday. Ora Allen called. I admire the brave spirit she shows in "burying her sorrow" for her little one and taking hold so earnestly of church work, instead of being overcome by her affliction. Received a letter from Miss Cain and wrote to Maj. Hutchinson in acknowledgement of a set of Calendar Cards he sent me. (T.S.R. 42. 2 P.M. 57. S.S. 52.)

Jan. 13. Sabbath. Cloudy and showery, this P.M. we had hail. Sister Susie is sixty eight years old, and hereafter the day will be a marked one