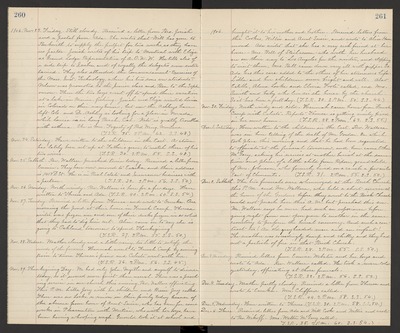 1906. Nov. 23. Friday. Still cloudy. Received a letter from Bro. Josiah and a postal from Ada. She writes that Will has gone to Beckwith to supply the pulpit for two weeks, as they have no pastor. Josiah writes of his trip to Montreal with Eliza as Grand Lodge Representative of A.O.W.W. He tells also of a side trip to Quebec, and of royally the delegates were entertained. They also attended the Commencement Exercises of the Mass. Inst. Technology, where his two sons are students. Nelson was promoted to the Junior class and Ben to the Sophomore. Then the two boys went off to spend their vacation at a lake in Maine, fishing. Josiah and Eliza visited Louise in Colorado on their house, but now the Ashleys have left Colo. and Dr. Ashley is looking for a place in Nevada while Louise is in Long Beach, Cal. Kate is greatly troubled with asthma. She is Mrs. Fogarty of Red Wing, Montana. (T.S.R. 35. 2 P.M. 62. S.S. 48.)

Nov. 27. Tuesday. Received a letter from Theresa and wrote to Eureka. One morning the pond at their home in French Camp. Theresa writes, was frozen over and one of their ducks frozen in so solid that they had to dig him out. Alice came in to say she is going to Oakland tomorrow to spend Thanksgiving. (T.S.R. 37. 2 P.M. 55. S.S. 50.)

Nov. 29. Thankgsgiving Day. We had only John, Myrtle and myself to dinner today, so it seemed more quiet than usual. There was a preaching service in our church this evening. Rev. Wallace officiating. This. P.M. Lilla Jory with her children and Bessie Jory called. There was no Locke reunion in their family today because of the absence from home of Aunt Susie, who has been for some weeks in Pleasanton with Mertice, who with her boys, have been having whooping cough. Gerould took it at school and

1906. brought it to his mother and brother. Received letters from the Cookes, Willie and Aunt Susie, and wrote to Alice Hammond. Ada writes that she has a very sick friend at her house. Mrs. Bell of Steilacoom, who with her husband are on their way to Los Angeles for the winter, and stopping to visit them, Mrs. Bell came down very ill with grippe. So Ada has this care added to the others of her strenuous life. Lilla and her children seem bright and well. Also Estelle, Alma Locke and Elvira Foote called, and Mrs. Smith and baby who live in the house by the church. So it has been a full day. (T.S.R. 30. 2 P.M. 50. S.S. 46.)

Dec. 1. Saturday. Have written to the children in the East. Rev. Wallace was in here telling of the death of Mr. Gordon, Sr. which took place this morning and that had been requested to officiate at the funeral tomorrow, and here came Ethel McGary, asking his services at another burial at the same time and place, of a little child from Ripon, grandchild of Mrs. Johnson, who formerly lived on a ranch a few miles East of Clements. (T.S.R. 31. 2 P.M. 55. S.S. 50.)

Dec. 2. Sabbath. The two funerals were solemnized at the Brick Church this P.M. and Mr. Wallace, who held a short service at the home of the Gordons before they went to the Brick Church could not preach here this A.M. but preached this eve. Mr. Wallace says he never had such an experience before going right from one open grave to mother in the same cemetery to perform the burial ceremony. And such a contrast too! An old gray headed man and an infant! The weather was exceedingly damp and chilly and they had not a particle of fire in that Brick Church. (T.S.R. 28. 2 P.M. 55. S.S. 50.)