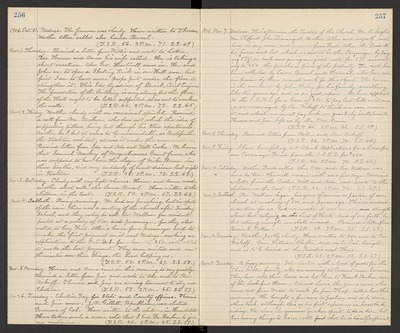 Nov. 1. Thursday. Received a letter from Willie and wrote to Lottie. Bro. Horace and Anna his wife called. He is taking a short vacation. Also Geo. Hartwell came in. He and John are to open a Skating Rink in our Hall soon, but first I am to have more props put under the floor to strengthen it. This I do by advice of Duail, Civil Engineer. The foundation of the building is very strong, but the floor of the Hall ought to be better supported so as not to weaken the walls. (T.S.R. 44. 2 P.M. 73. S.S. 65.)

Nov. 2. Friday. Weather cloudy with an ocassional sprinkle. Received a call from Mr. Ambrose, who does not relish the idea of supporting pillars being put through his Store apartments. Neither do I, but it seems to be unavailable, as Rushforth the Stockton architect, advises it under the circumstances. Received letters from Ida and Ada and Will Cooke. We learn that Samuel Markey of Moquelumous Grant fame, who was supposed to have been the slayer of Mike Brun in those troubles, died very suddenly of heart disease last night in Stockton. (T.S.R. 48. 2 P.M. 73. S.S. 63.)

Nov. 4. Sabbath. Rainy morning. We had no preaching, but inspite of the rain there was a meeting of the church after Sunday School, and they voted to call Rev. Wallace for resident pastor at a salary of $500. And parsonage, for they also voted to by Fred. Allen's house for a parsonage and to make the first payment on it next Wednes. making an application to the C.C.B.S. for a loan of $250, with which to make the last payment. They seem united and enthusiastic over these things, the Lord helping us. (T.S.R. 54. 2 P.M. 67. S.S. 58.)

Nov. 6. Tuesday. Election Day for State and County officers. Theresa and Jim came. J. N. Gillett, Republican, was elected Governor of Cal. Have written to the children in Humboldt. Have taken such a severe cold that I had Dr. Barbour to give me medicine. (T.S.R. 40. 2 P.M. 65. S.S. 59.)

1906. Nov. 7. Wednes. This afternoon, the Trustees of the Church, Mr. A. Inglis. Mr. Clifford, John Demangcot, Mother Allen and myself, met here in my room, and received from Fred. Allen the Deed to his house and lot, which is now to be the Parsonage, by paying $575. in cash and giving our joint note for $275. amounting to $850. the purchase piece of the property. The cash has been collected by Laura Bruml and Hannah, who have won our praise by their earnest work for this object. The house is the one built by John Haley for his family, something like ten years ago, and is in good repair. We have applied to the C.C.B.S. for a loan of $250. to pay last bills on it, and we are encouraged by Rev. Wikoff to think we can receive it, and which we must pay back in quarterly instalments. Theresa and Jim left us by the P.M. train. (T.S.R. 40. 2 P.M. 66. S.S. 59.)

Nov. 11. Sabbath. Rev. Wallace began this year of service as pastor of our church at a salary of $500. and parsonage. This is indeed a venture for us, but we make it not in our own strength alone, but relying on the Lord of Hosts. And if our faith be but strong enough we shall succeed. Received a letter from Bessie K. Patton. (T.S.R. 48. 2 P.M. 75. S.S. 68.)

Nov. 13. Tuesday. A foggy morning. John started with a load of goods for the Chas, Miller family, who are moving to Cement near Suisun. They have sold their house and lot here to Frank Parker, once of the Lockeford House. Edward Lewis, the young man who came out from Mass, to work for Jim Thorp, called here this morning. He brought a few cows to pasture and is to drive others back, although this is his first experience in horseback riding. He shows the genuine Yankee spirit, to do or dare, but has many things to learn, will find that he is too self sufficient.