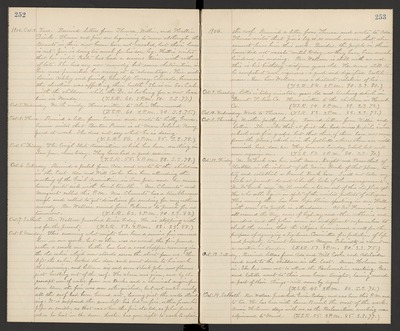 1906. Oct. 2 Tues. Received letters from Theresa, Willie, and Hattie Dierks. Theresa and Jim are beginning to move although the tenants in their new home have not vacated, but their lease is out. Jim is doing too much for his sore leg. Hattie writes that her sister Kate has had a serious time with asthma of late. She has my new remedy but some obstruction in her nose prevented her using it to advantage. Her sister Louise Ashley and family have left Ouray, Colorado, because the elevation was affecting their health. She is in So. Cal. with the children while the Dr. is looking for a new location in Nevada. (T.S.R. 60. 2 P.M. 90. S.S. 77.)

Oct. 6. Saturday. Received a postal from Ada and wrote to the children in the East. Ada and Will Cooke have been attending the meeting of the Gen'l Association in San Jose and he came home quite sick with bowel trouble. Mrs. Clements and Margaret called this P.M. Mrs. Clements has a troublesome cough and called to get directions for sending for my asthma remedy. Rev. Wallace arrived from Palermo to preach for us tomorrow. (T.S.R. 62. 2 P.M. 90. S.S. 83.)

Oct. 8. Monday. This morning what might have been a serious fire occurred here in our yard, but as there was no wind, the fire proved rather a small one. Luther has bed a wood chopper rooming in the old cabin which now stands across the street from us. He left the cabin, locked the door and went down to his work this morning, and between six and seven o'clock John saw flames just bursting out of the roof. The alarm was given, and by the prompt use of water from our tanks and a chemical engine from down town, the fire was soon extinguished, but not until nearly all the roof had been burned out, leaving just the walls standing. It is supposed the man left his bed on fire, either from his pipe or candle, as that was where the fire started, as John found where he beat in the door. Luther has gone right to work to repair

1906. the roof. Received a letter from Theresa and wrote to Ada. Theresa writes that Jim's leg is so much worse that she cannot leave him this week. Besides, the people in their house did not vacate until today, so they have been much hindered in moving. Rev. Wallace is still with us and this is his birthday, sixty one years old. He seems still to be competent and vigorous a good and dignified Scotchman. Hon. Lew Wallace was a distant relative of his. (T.S.R. 54. 2 P.M. 90. S.S. 80.)

Oct. 11. Thursday. Weather partly cloudy. Received letters from Willie and Lottie. She writes that at first she had nine pupils in her school and five grades, but that three of them have now moved from the place, which is in the foot hills, where there are wild animals, bear, deer, x.c. They have no Sunday School but will soon organize one. (T.S.R. 53. 2 P.M. 80. S.S. 70.)

Oct. 12. Friday. Mr. McGurk was here with Messrs. Knight and Rosenthal of Stockton in the interest of the Union Bank of that place, to try and establish a branch Bank here. I will not take any stock at present- do not like the looks of the management. Mr. McGurk says, "We'll make a town out of this old place yet. He who sells liquor in spite of the united protests of citizens. This evening there has been Republican speaking in our Hall with some 500 people in attendance. At San Francisco and all around the Bay, cases of highway and other robberies and murders, and the police seem so indifferent or powerless to check the crimes, that the citizens leave issued a call for the purpose of organizing a Vigilance Committee for protection of life and property, to meet tomorrow. Mayor Schmidtz is absent on a vacation in Europe. (T.S.R. 53. 2 P.M. 80. S.S. 75.)

Oct. 13. Saturday. Received letters from Ada and Will Cooke and Adelaide and wrote to the children in the East. Annie Holman came in. She has come out to attend the Reclamation meeting. Geo and Estelle went to their own house tonight, having moved a part of their things, will move by degrees. (T.S.R. 48. 2 P.M. 82. S.S. 76.)