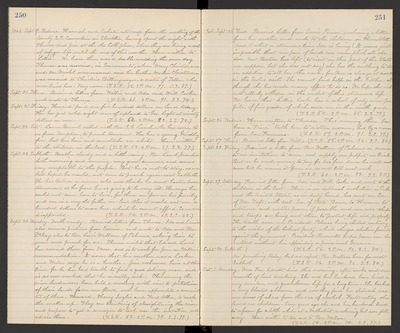 1906. Sept. 19. Wednesday. Hannah and Celeste returned from the meeting of the County S.S. Convention in Stockton, having spent the night with Theresa and Jim at the old Cobb place, where they are living a sort of refugee life until the end of this month. Have written to Lottie. We learn there was a double wedding the same day Theresa was married, in Sacramento, when Mary Christiansen and Mr. Miehl were married and her brother Martin Christiansen was married to Christine Billingmeyer, a sister of Tillie, who once lived here. Very warm. (T.S.R. 56. 2 P.M. 97. S.S. 87.)

Sept. 23. Sabbath. Weather cloudy and a little rainy. Rev. Lamb preached both morning and evening, very good sermons, and seems very acceptable to the people. But he is not to stay, as we had hoped he would, not even to preach again next Sabbath. He has taken a severe cold and thinks he must hasten home tomorrow, as he fears he is going to be very ill. He says he could not come here to live, for there are four in his family and one is a very old father-in-law. Also it would cost over a hundred dollars to move here, which he cannot afford. So we are disappointed. (T.S.R. 54. 2 P.M. 69. S.S. 62.)

Sept. 24. Monday. North windy. Received letters from Theresa, Ida and Eunice also camera pictures from Eunice, and wrote to Ada and Rev. DeKay, also to Rev. Louis Wallace of Palermo, asking him to come and preach for us. Theresa writes that Edward Lewis has arrived there from Mass. and is to work for Jim on Willie's recommendation. It seems that his mother was a Locke and Willie says he is a hustler. Jim welcomes him at this time for he has had trouble to find a good delivery man, and is so over-worked that he is really sick. This morning the river land-owners have held a meeting with view to protection of their lands from over flows, and have appointed a committee of three, Howard, Harry Inglis and Fred Allen, to work the matter up. They are thinking of straightening the river and propose to get a surveyor to look over the situation and advise them. (T.S.R. 52. 2 P.M. 79. S.S. 77.)

1906. Sept. 25. Tues. Received letter from Susie Pascoe enclosing a letter from her mother and wrote to the children in Humboldt. And O what a strenuous time Ida is having! It seems just impossible that one pair of hands can accomplish all she does. Now Benton has left (to visit in this part of the State we suppose, but she does not say) she has the milking to do in addition to all her other work, for Ben is always at work in the Scotia mill. She cannot find help in the kitchen although she has made many efforts to do so. We hope she will not utterly collapse in the midst of this strenuous life. We learn that Lottie Locke has a school of only nine pupils, of five grades, of which some are in the ninth grade. (T.S.R. 54. 2 P.M. 85. S.S. 79.)

Sept. 28. Friday. Received a letter from Rev. Wallace of Palermo in answer to our invitation to come and supply our pulpit on trial. But as he needs money to pay for his fare down he will not come till he receives it from us, so not till next week. (T.S.R. 60. 2 P.M. 93. S.S. 85.)

Sept. 29. Saturday. Received letter from Ada and Will Cooke and wrote to the children in the East. There is an internal revolution in Cuba and the United States, as in duty bound, has sent our Sec. of War Taft, with Asst. Sec. of State Bacon, to Havana to intervene and restore peace, if possible, and our war-ships and troops are being sent there to protect life and property. The trouble arose over President Palmas being elected contrary to the wishes of the Liberal party, which charges election frauds against the government. President Roosevelt hopes peace can be restored without his appointing a provisional Governor. (T.S.R. 56. 2 P.M. 92. S.S. 80.)

Oct. 1. Monday. Mrs. Van Zandt died this morning, after weeks and even months of hard drinking. She and her husband have lived a very drunken and quarrelsome life for a long time. She has had a very bloated abdomen and now they find her stomach was one mass of ulcers from the use of alcohol. Fortunately she leaves no children. Some years ago she and her husband tried to reform for a little while at a Methodist awakening but soon fell away. Have written to Ada and to Rev. Wallace. (T.S.R. 56. 2 P.M. 90. S.S. 77.)