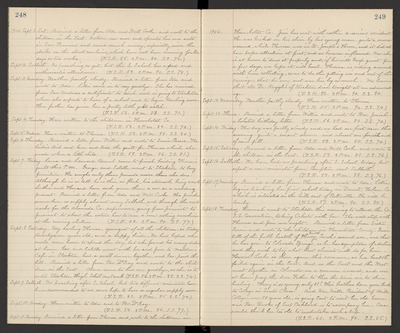 1906. Sept. 1. Sat. Received a letter from Ada and Will Cooke and wrote to the children in the East. Weldon now owns and operates his own auto in San Francisco and earns much money, especially since the strike on the street car lines, which have not been running for ten days or two weeks. (T.S.R. 55. 2 P.M. 80. S.S. 72.)

Sept. 3. Monday. Weather partly cloudy. Received a letter from Ida and wrote to Ada. Lottie came in to say goodbye. She has received from San Andreas a certificate to teach and is going to Stockton where she expects to hear of a school and to begin teaching soon. Her father has given her a pretty little gold watch. (T.S.R. 56. 2 P.M. 83. S.S. 71.)

Sept. 7. Friday. Laura and Leonard Bruml came to finish building Theresa's quilt this P.M. George and Estelle went to Stockton to buy furniture. He weighs only three pounds more than she does. Although he is so tall, he is thin in flesh, his stomach being weak. Luther and Howard have each given them a cow as a wedding present. Received a letter from Ada and Will Cooke. He preaches somewhere as supply almost every Sabbath, and through the week works for the Alameda Co. supervisors, going from precinct to precinct to show the voters how to use a new voting machine at the coming election. (T.S.R. 62. 2 P.M. 94. S.S. 77.)

Sept. 8. Saturday. My darling Theresa, youngest of all the children, is today twentyseven years old, and a happy bride. We had hoped she could come home to spend the day, but she found too many duties at home. Geo. and Estelle went with her and Jim to Madden's Cafe in Stockton, had a swell dinner together, and Geo. paid the bill. Received a letter from Rev. DeKay and wrote to the children in the East. Alma came to bid me goodbye, as she is to enter Stockton High School next week. (T.S.R. 56. 2 P.M. 88. S.S. 74.)

Sept. 11. Tuesday. Received a letter from Theresa and wrote to the children in

1906. Humboldt Co. Jim has met with rather a serious accident. He was kicked on his shin by his young man, quite a severe wound, while Theresa was in St. Joseph's Home, and it did not have proper attention at first, and so became inflamed. Now she is at home to dress it properly and, if he will keep quiet for a few days, we hope it will heal. Theresa is riding around with him collecting, so as to do the getting in and out of the carriage, that he may not use his leg so much. We learn that old Dr. Ruggles of Stockton died tonight at an advanced age. (T.S.R. 56. 2 P.M. 90. S.S. 80.

Sept. 17. Monday. Received a letter from Theresa and wrote to Ada. Lottie begins teaching her first school today in Daunt, Teclare Co. which is situated i the hills east of Porterville. She will be lonely. (T.S.R. 57. 2 P.M. 90. S.S. 80.)

Sept. 18. Tuesday. Hannah went to Stockton this morning to attend the Co. S.S. Convention, taking Celeste with her. She will stop with Theresa and Jim over night. Received a letter from Sister Susie and wrote to the children in Humboldt County. Susie tells of the feeble health of Harry Smith, Sarah's second son, and that he has gone to Colorado Springs, as he has symptoms of decline and they wish to try what that climate will do for him. Harriet Locke is there again this summer, as her health failed again in the East. And so the East and the West meet together in Colorado on a common errand, and we at home pray the dear Father to bless the tonic air to their healing. Harry is so young, only 21! His brothers have gone back to College in Santa Clara. And Mrs. Mills, President of Mills College, over 80 years old, is going East to visit her old home and Rev. Brooks of East Oakland is to accompany her. One would think her too old to undertake such a trip. (T.S.R. 60. 2 P.M. 94. S.S. 85.)