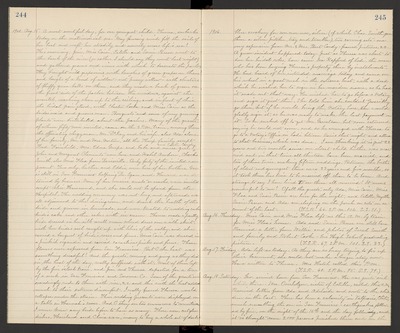 1906. Aug. 15. A most eventful day, for our youngest child, Theresa, embarks today on the matrimonial sea. May favoring winds fill the sails of her boat and waft her steadily and securely across life's sea! This morning, Jim, Miss Cain, Estelle and Susie Pascoe went to the bank of the river (or rather I should say they went last night) and gathered greens and vines with which to decorate the parlor. They brought wild grapevines with bunches of green grapes on them and boughs of a kind of willow not "pussy willow" with clusters of fluffy green balls on them, and they made a bank of green on the front side of the parlor between the windows, against the mantel, reaching clear up to the ceiling, and in front of this the bridal pair stood, with Chester Locke and Miss Cain as the bride's maid and groom's man. Bouquets and some of my growing plants were distributed about the parlors. Many of the guests, of whom fifty were invited, came on the 2 P.M. train, among them the officiating clergyman, Mr. DeKay and his wife, also Ada alone of her family, Mr. and Mrs. Norton, all the Thorp family except Fred. Fairchild, Mrs. Edna Grupe and babe and nurse girl and Estelle Condy. John and Margaret Clements were here, and Mabel Ambrose, Charles Smith, also Miss Flaa from Davisville. Only forty of the invited were present. Two only, Luther and Eddie, were here of her brothers. Geo. is still in San Francisco helping Dr. Egan, and Howard was detained by business. None of her cousins, aunts or uncles, were invited except Alice Hammond, and she could not be spared from the Hospital. The wedding ceremony was not long, and afterwards we all adjourned to the dining room, and drank the health of the bride and groom in lemonade, and were treated to wedding cake bride's cake and other cakes with ice cream. Theresa made a pretty bride dressed in her silk-mull cream colored dress over a silk skirt, with her bride's veil caught up with lilies of the valley, and she carried a bouquet of bride's roses and ferns. Miss Cain was dressed in a pinkish organdie and carried carnation pinks and ferns. These flowers were expressed from San Francisco. But O the heat was something dreadful! And the guests, coming and going as they did in the heat of the day, really suffered with it. Most of them left by the five o'clock train, and Jim and Theresa departed for a tour of a week in San Francisco and Sonoma Co. Some of the guests were exceedingly [?] to them with rice, x.c. and this with the heat added much to their extreme discomfort. I really feared Theresa would collapse under the strain. Their wedding presents were displayed on a table in Hannah's room. And O they are to numerous to mention. I never knew any bride before to have so many. There were cut glass dishes, Haviland and China ware, money to buy a whole set of dark

1906. blue crockery for common use, silver (of which Chas. Smith gave them a silver pitcher, tray and tumbler), two carving sets one very expensive from Mr. & Mrs. Bert Condy framed pictures, x.c. A queer incident happened today. Just as Theresa was about to don her bridal robes, here came Ira Kepford of Lodi, the man who has been buying Theresa's property there by installments. He had heard of her intended marriage today and came on his wheel in a great rush in the extreme heat, with a deed which he wished her to sign in her maiden name, as he had it made out that way. He wished her to go before a Notary and sign it just then. She told him she couldn't possibly go them, but if he would bring the Notary here, she would gladly sign it, as he was ready to make the last payment on it. So he rushed off to get Mr. Garretson, but soon returned saying he could not come, and so he arranged with Theresa to go to a Notary's Office in Lodi between trains that night and attend to that business, which was done. I am thinking it is just 22 years and two months since our eldest child Luther was married and in that time all thirteen have been married, and two of them twice, making fifteen weddings. Between the births of eldest and youngest there were 23 years and five months, so it took them less time to be married off than to be born. And strange to say I have lived to see them all married! It seems wonderful to me! Of all the guests, only Ada, Miss Cain, Miss Flaa and Susie Pascoe are here for the night, and Estelle, Myrtle Susie Pascoe and Ada are sleeping on the porch on [?] on account of the heat. (T.S.R. 66. 2 P.M. 106. S.S. 91.)

Aug. 18. Saturday. Geo. arrived home from San Francisco. He was quite sick while there. Mrs. Overholzer, sister of Estelle, called this A.M. Received letters from Ada and Adelaide and wrote to the children in the East. There has been a calamity in Valpraise, Chili, much resembling the one in San Francisco earthquakes followed by fire, on the night of the 16th and the day following, and it is thought some 2000 persons perished these and in the