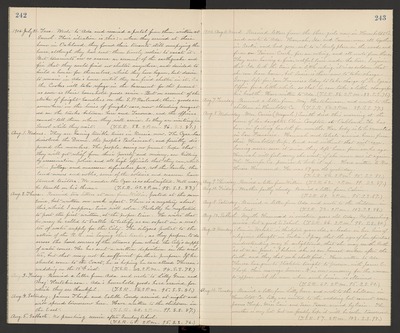 1906. July 31. Tues. Wrote to Ada and received a postal from them written at Sunol. Their situation is this: - when they arrived at their home in Oakland, they found their tenants still occupying the house, although they had sent them timely notice to vacate it. But tenements are so scarce on account of the earthquake and fire that they could find no shelter anywhere, and decided to build a house for themselves, which they have began, but desire to remain in Ada's house until they can find shelter in it. So the Cookes will take refuge in the basement for the present as soon as their household goods arrive. But on account of the strike of freight handless on the S.P. Railroad, their goods are somewhere in the lines of freight cars, now standing congested on the tracks between here and Tacoma, and the officers cannot tell them when they will arrive. So they are visiting in Sunol while they wait. (T.S.R. 58. 2 P.M. 96. S.S. 81.)

Aug. 1. Wednes. They are having terrible time in Russia now. The Czar has dissolved the Duma. the people's Parliament, and forcibly dispersed the members. The people, seeing no present hope that they will get relief from their poverty and misery, are killing by assassination police and all high officials that they can, while other pillage and massacre defenseless jews, rob the banks, the land-owners and nobles, some of the soldiers and seaman have turned traitors. We wonder the Czar is so short sighted. Well may he tremble on his throne. (T.S.R. 62. 2 P.M. 98. S.S. 83.)

Aug. 2. Thurs. Received two letters at once from Willie, posted at the same time, but written one week apart. There is a mystery about this, which I suppose time will solve. Probably he neglected to post the first written, at the proper time. He writes that he may be called to Seattle to testify as an expert in a matter of water supply for the City. The citizens protest to the action of the R.R. in laying their tracks, as they propose to do, across the head sources of the streams from which the City's supply of water comes. He has sent a written deposition in the matter, but that may not be sufficient for their purpose. If he should come to the Coast, he is hoping he can attend Theresa's wedding on the 15th inst. (T.S.R. 62. 2 P.M. 94. S.S. 78.)

1906. Aug. 6. Mond. Received letters from the three girls now in Humboldt Co. and wrote to Ada. Hannah, Ida and Eunice were all together in Scotia and had gone out to a lovely place in the woods and ferns on Dinner Creek, for an outing, and all wrote from there. They were having a fine, restful time under the trees. I rejoice that Ida took the time for a little outing, it is so seldom that she can leave home, but Susie is there now to take charge. George left for San Francisco today to take charge of Dr. Egan's Office for a little while, so that he can take a little change for his health. Have written to Ada. (T.S.R. 56. 2 P.M. 88. S.S. 71.)

Aug. 8. Wednesday. Mrs. Carrie (Megerle) Smith died this morning at the home of her daughter Olive Compton at Oakland. She has been in failing health for months. Her body is to be cremated in San Francisco. Hannah and Celeste arrived home from their Humboldt trip, tired and without that suit case, having never seen it since they left home four weeks ago. Hannah will feel sorry she went, if she never sees it again. The Transfer Co. promise to took it up. Have written to Bro. Horace Hammond. He was 59 yrs. old yesterday. (T.S.R. 56. 2 P.M. 95. S.S. 81.)

Aug. 13. Monday. Eunice Webster is thirtytwo years old, a leader in her line of religious thought in Scotia. I pray that the eyes of her spiritual understanding may be enlightened, that she may see the truth "as it is in Jesus." I believe she is an honest seeker after the truth, and "they that seek shall find," Have written to Ada. Theresa has gone to Stockton tonight to procure, with James E. Thorp, their marriage license. It is now necessary for the woman to appear with the man when such license is obtained. (T.S.R. 60. 2 P.M. 95. S.S. 80.)

Aug. 14. Tuesday. Received a letter from Lilly Greve and wrote to the children in Humboldt Co. Lilly was invited to the wedding but cannot come. James Thorp, Miss Cain and Susie Pascoe arrived by train. The weather is very hot but we fondly hope it will be cooler tomorrow. (T.S.R. 57. 2 P.M. 103. S.S. 93.)