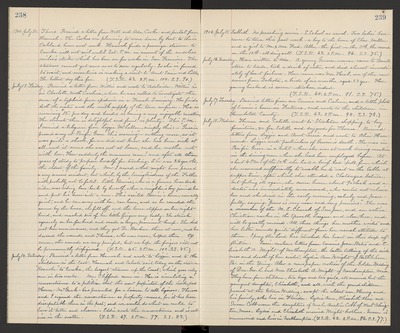 1906. July 12. Thurs. Received a letter from Will and Ada Cooke and postal from Hannah. The Cookes are planning to come down by boat to their Oakland home next week. Hannah finds a passenger steamer to Eureka will not sail until Sat. P.M. on account of the senseless sailor's strike which has been on for weeks in San Francisco. The steamers cannot get crews so as to run regularly. So she is forced to wait, and meantime is making a visit to Aunt Susie and Lilla. The hottest day thus far. (T.S.R. 63. 2 P.M. 104. S.S. 90.)

July 13. Friday. Received a letter from Willie and wrote to Adelaide. Willie is in Charlotte, North Carolina, where he was called to investigate the cause of a typhoid fever epidemic in a Female Seminary. He finds both the water and the milk supply of the town impure. He is receiving $15. per day and besides is having a very enjoyable vacation. The climate there is delightful and fruit is plenty. This P.M. I received a telegram from Lizzie McLellan, simply this: - "Gussie passed away at Pacific Grove this morning: "- nothing more, so it was quite a shock, for we did not know she had been sick at all, and it seems she was not at home, and her mother not with her. How suddenly the summons came! and after all these years of study to prepare herself for teaching. She was 26 yrs. old, the eldest of the family. Now I record what might have proved a very serious accident, but which, by the loving kindness of the Father will, probably, not be fatal. Little Bernice, who is a famous horse back rider, was riding bare-back by herself, when a neighbor's boy joined her and put his horse into a run. This excited Bernice's horse, usually quiet, and he ran away with her, ran home, and as he rounded the corner by the house, she fell off, and the horse stepped on her right hand, and mashed two of her little fingers very badly. She struck squarely on her forehead and made a large, prominent bump. She did not lose consciousness, and they got Dr. Barbour there at once, and he dressed the wounds, and Theresa, who was near, helped them. Of course, the wounds are very painful, but we hope the fingers will not be permanently disfigured. (T.S.R. 65. 2 P.M. 102. S.S. 85.)

July 14. Saturday. Received a letter from Hannah and wrote to Lizzie and to the children in the East. Hannah and Celeste sail today on the steamer "Roanoke" to Eureka, the largest steamer up the Coast, which goes only once in two weeks. Mr. Clifford came in. He is circulating a remonstrance to a petition that the new proprietor of the Lockeford House McGurk - has presented for a license to sell liquors. Theresa and I signed the remonstrance as property owners, for it has been disreputable there in the past, and we would do what we could to have it better and cleaner. Eddie wrote the remonstrance and is active in the matter. (T.S.R. 67. 2 P.M. 97. S.S. 83.)

July 16. Monday. Have written to Ada. A young German woman came to Bruml's store to trade, took a drink of water, and died almost immediately of heart failure. Her name was Mrs. Hieb, one of the new comers from Dakota, a bride of six months, aged 23 yrs. Her young husband is sorrow-stricken indeed. (T.S.R. 60. 2 P.M. 91. S.S. 75.)

July 18. Wednes. Theresa and Estelle went to Stockton shopping, to buy furniture, x.c. for Estelle and dry goods for Theresa. Received letters from Lizzie and Aunt Susie and wrote to Alice Hammond. Lizzie wrote particulars of Gussie's death. She was in Pacific Grove in a hotel where she was at work during vacation in the dining room where she had been employed before. At about 4 P.M. of the 12th she had a brief bad spell from which she recovered sufficiently to enable her to wait on the table at supper time, after which she attend a Chatauqua lecture, but feeling ill again, she came home about 9 o'clock and a doctor was immediately summoned, who could not relieve her and she died in the early morning, calonly and peacefully, saying, "Jesus is very near and very precious." She was a member of the M.E. Church of San Jose, and an active Christian worker in the Epworth League and elsewhere, and will be greatly missed. All these things her mother writes and her letter sounds quite different from her usual attitude to them. I pray the Lord has touched her heart in this deep affliction. Susie encloses letters from Cousins Joan Bates and Elisabeth A. Wright of Northampton, the latter telling of the sickness and death of her sister, Lydia Ann Wright of Bethlehem Pa. in the spring. Also a newspaper notice of the Golden Wedding of Dea. Geo. L. and Mrs. Elisabeth A. Wright of Northampton, Mass. They have four children, two boys and two girls, all married but the youngest daughter, Elisabeth, and all, with the grandchildren, present at the Golden Wedding, except the eldest son, Henry and his family, who live in Florida. Lydia Ann, Elisabeth Alice and Susan Cobb were the daughters of Uncle Austin Cobb of West Abington, Mass. Lydia and Elisabeth married Wright brothers. Susan is unmarried and lives in Northampton. (T.S.R. 62. 2 P.M. 96. S.S. 77.)