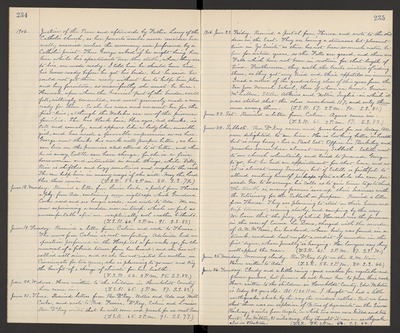 1906. Justice of the Peace and afterwards by Father Lacey of the Catholic Church, as her parents would never consider her really married unless the ceremony were performed by a Catholic priest. Then George asked if he might bring her here while his apartments over the stable, where they are to live, are made ready. I told him he should have had his house ready before he got his bride, but he said he could not get them ready without her to help him plan and buy furniture, so manifestly she must be here. Hannah, upon whom the heaviest part of the burden would fall, willingly consented, and most graciously made a room ready for them. So she has come and we meet her for the first time, although the Walshes are one of the pioneer families. She has black hair, blue eyes, red cheeks, is tall and comely, and appears like a lady like, sensible girl, and has made a favorable impression on us here. George now thinks his work will prosper better, as he can live on the promises and attend to it better, and when he is away, Estelle can have charge, for she is a fine house woman and interested in such things, while Billy Rice is shiftless and lazy sometimes and neglects the work. She can help him in many ways if she will. May the Lord bless their union. (T.S.R. 52. 2 P.M. 80. S.S. 79.)

June 18. Monday. Received a letter from Louise Locke, a postal from Theresa a pkg. from Ada, containing seven night caps which Grandma Cooke used and no longer needs, and wrote to Ada. We are now experiencing a sudden rise in temp. which we feel as uncomfortable after our exceptionally cool weather hitherto. (T.S.R. 60. 2 P.M. 91. S.S. 83.)

June 19. Tuesday. Received a letter from Calvin and wrote to Theresa. The news from Calvin is not comforting. Adelaida had an operation performed in the Hospital a few weeks ago, for the removal of a fibroid tumor from her breast, and she has not rallied well since, and as she has not visited her mother in Cincinnati for two years, she is planning to go now and try the benefit of a change of climate for her health. (T.S.R. 62. 2 P.M. 95. S.S. 83.)

1906. June 22. Friday. Received a postal from Theresa and wrote to the children in the East. They are having a strennous but pleasant time in Yo Semite as there has not been so much water before for sixteen years, so the Falls are grand, and there are Falls which have not been in motion for that length of time. Furthermore, they walk the trails instead of riding them, so they get very tired and their appetites are immense. I read a notice of the graduating class of this year from the San Jose Normal School, three of whom we know. Gussie McLellan, Stella Atkins and Nellie Inglis - in which it was stated that the class numbered 117, and only three men among them. (T.S.R. 57. 2 P.M. 90. S.S. 81.)

June 24. Sabbath. Rev. DeKay came and preached for us today. All were delighted to see him. He is looking better in health but is very busy - has a Real Est. Office in Berkeley and preaches somewhere almost every Sabbath. Estelle went to our church voluntarily and tried to persuade George to go, but he had an appointment for that hour, and so it is almost every Sunday, but if Estelle is faithful to attend meeting herself perhaps after a while she can persuade Geo. to so arrange his calls as to give time to go to church. The trouble is, many farmers "save up" their business with the Veterinary for the Sabbath on purpose. Received a letter from Theresa. They are planning to start on their homeward trip tomorrow, coming slowly, and camping by the way. We learn that the jury, of which Howard was the foreman in the case of Emma Le Doux, charged with the murder of A.N. McVicar, her husband, whose body was found in a trunk, rendered lost night a verdict of murder in the first degree, whose penalty is hanging. Her lawyers say they will appeal the case. (T.S.R. 61. 2 P.M. 87. S.S. 70.)

June 26. Tuesday. Cloudy and a little rainy - good weather for vegetable and flower gardens, but farmers do not know how to plan their work. Have written to the children in Humboldt County. Edw. Webster is today 40 years old. At 1:20 P.M. I thought we had a little earthquake shock, by the way the windows rattled. But we learn that there was an explosion of 1 1/2 tens of dynamite on the Sierra Railway, 6 miles from Angels, in which to men were killed and two hurt. In Milton, 21 miles away, they thought it was an earthquake also in Stockton. (T.S.R. 55. 2 P.M. 66. S.S. 64.)