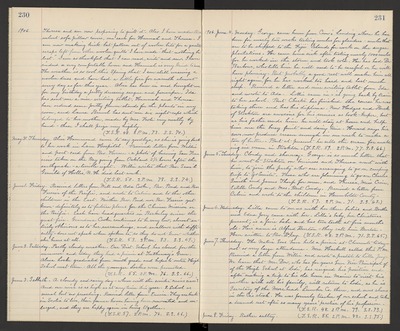 1906. Theresa and am now proposing to quilt it. Also I have made two velvet sofa pillow covers, one each for Hannah and Theresa. I am now making brick-bat pattern out of woolen bits for a quilt, scraps left from other woolen quilts I have made - "that nothing be lost." I am so thankful that I can read, write and sew. I have indeed a very comfortable home and Hannah is very kind to me. The weather is so cool this spring that I am still wearing a woolen dress and have had a little fire for warmth almost every day so far this year. Alice has been in and brought me for my birthday a pretty dressing sacque and penwiper, Ida has sent me a nice writing tablet, Hannah and Theresa have ordered some pretty flower stands for the plants in my room, and Laura Bruml has sent me six night caps which belonged to his mother, made by Mrs. Foote very neatly by hand - these I shall prize very highly. (T.S.R. 48. 2 P.M. 73. S.S. 70.)

May 31. Thursday. Alice Hammond came to say goodbye, as she is going back to her work in Lane Hospital. Received letter from Willie and post card from Bro. Horace - a photo of burning San Francisco taken on the Bay going from Oakland 3 1/2 hours after the earthquake - a terrible sight. Willie writes that Rev. Sam'l Gerould of Hollis, N.H. died last week. (T.S.R. 50. 2 P.M. 78. S.S. 74.)

June 1. Friday. Received letters from Will and Ada Cooke, Rev. Pond an Rev. Ferrier of the Pacific, and wrote to Calvin and to the other children in the East. Neither Rev. Pond nor Rev. Ferrier yet know - definitely as to future plans for the Chinese Mission or the Pacific. Each have headquarters in Berkeley since the great fire. Grandma Cooke continues to be very low, almost entirely oblivious as to her surroundings, and swallows with difficulty does not speak when spoken to, so they do not know whether she hears at all (T.S.R. 53. 2 P.M. 83. S.S. 69.)

June 2. Saturday. Partly cloudy weather. Our Dist. School has closed for the summer and today they had a picnic at Tretheway's Grove. Alma Locke graduated from ninth grade and hopes to enter High School next term. All the younger Lockes were promoted. (T.S.R. 55. 2 P.M. 76. S.S. 66.)

June 3. Sabbath. A cloudy and rainy day - when will the winter rains cease? And our river is as high as at any time this year. S. School as usual but no preaching. Received letter from Eunice. They are back in Scotia to live, their former home having been renovated and enlarged, and they are happy again in being together. (T.S.R. 57 2 P.M. 76. S.S. 66.)

1906. June 4. Monday. George came home from Crow's Landing where he has been for nearly two weeks testing mules for glanders - mules that are to be shipped to the Fuji Islands for work on the sugar plantations. He came home sick after testing nearly 1000 mules for he worked in the storm and took cold. He has had Dr. Barbour, who tells him he will need to be careful or he will have pleurisy. But probably a good rest will make him all right again, for he has worked too hard and lost much sleep. Received a letter and nice writing tablet from Ida and wrote to Ada. Lottie came in - is going back by train to her school. But Chester has finished the course he was taking there and has his diploma. Now Hudges and Buck of Stockton are anxious for his services as book-keeper, but as his father needs him he will stay at home and help him over the busy first and dairy time. Howard says his cows now produce cream enough in one week to make a ton of butter. But at present he sells the cream for making ice cream in Stockton. (T.S.R. 59. 2 P.M. 77. S.S. 66.)

June 5. Tuesday. Cloudy and showery. George is so much better that he went to Stockton on business and Theresa went with him, to join the party who are arranging to go on camping trip to Yo Semite. Those who are planning to go are Charles Smith and James Thorp for men, and Theresa, Miss Cain, Estelle Condy nd Mrs. Bert Condy. Received a letter from Calvin and wrote to the children in Humboldt County. (T.S.R. 57. 2 P.M. 71. S.S. 63.)

June 6. Wednesday. Lilla came to see us with her three babies and Bertha and Edna Jory came with her. Lilla's baby, her Christmas present, is a fine babe and has two teeth at five months old. His name is Alfred Burton they call him Burton. Have written to Rev. DeKay. (T.S.R. 48. 2 P.M. 71. S.S. 65.)

June 7. Thursday. The Native Sons have held a picnic at Clements today not so very large attendance. Mrs. Haskell called this P.M. Received a letter from Willie and wrote a postal to Lilla Jory. We learn that Mr. Dow, who has years been Vice Principal of of the High School at Lodi, has resigned his position and after making a trip to his old home in Maine to visit his mother with all his family, will return to Lodi, as he is Secretary of the Morehead Lumber Co. there, and owns shared in the Co.'s stock. He was formerly teacher of our school and takes a deserved rest after so many years' practice of his profession. (T.S.R. 48. 2 P.M. 79. S.S. 73.)