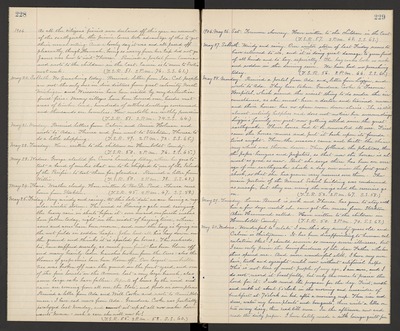 1906. As all the citizens picnics were declared off this year on account of the earthquake, the picnic-lovers took advantage of this to get their usual outing. And a lovely day it was and all passed off pleasantly, though Hannah, being so weary from her trip did not go. James was here to visit Theresa. Received a postal from Eunice and wrote to the children in the East. Eunice is to move to Scotia next week. (T.S.R. 51. 2 P.M. 76. S.S. 61.)

May 20. Sabbath. No preaching today. Received letter from Ida. Cal. people are not the only ones in dire distress from great calamity. North Michigan and Wisconsin have been visited by very destructive forest fires. Many villages have been burned over, besides vast areas of timber land, hundreds of settlers dwellings consumed and thousands are homeless. How unstable are earthly possessions. (T.S.R. 51. 2 P.M. 74. S.S. 64.)

May 25. Friday. Very windy and rainy. At this late date we are having a regular winter storm. The wind is blowing a gale and carrying the heavy rain in shuts before it over one and one fourth inches have fallen today, right in the midst of haying time, when acres and acres have been mown, and now the hay is lying in the wet fields in sodden heaps. John had all his hay down on the ground and thinks it is spoiled for horses. The orchards, too, have suffered severely, as much green fruit has been blown off and many heavily - laden branches broken from the trees - also the blooms of grape vines have been blown off. Our largest umbrella tree was broken off near the ground in the front yard, and one of the fine locusts on the Avenue lost a very large branch, also some large oaks have fallen. Reports of losses by the wind and rain are coming from all over the State, and floods in some places. Received a letter from Ada and Will Cooke and wrote to Annie Holman. I have sad news from Ada. Grandma Cooke was partially paralyzed last Monday, and cannot sit up at all nor make her wants known - such a care she will now be! (T.S.R. 55. 2 P.M. 58. S.S. 60.)

May 27. Sabbath. Windy and rainy. Our winter storm of last Friday seems to have returned to us, and it is doing great damage to green fruit of all kinds and to hay, especially. The hay cocks look so sick and sodden in the driving rain. We have had no preaching today. (T.S.R. 56. 2 P.M. 66. S.S. 60.)

May 28. Monday. Received a postal from Ada and letter from Lizzie, and wrote to Ada. They have taken Grandma Cooke to Tacoma Hospital, which seemed the wisest thing to do under the circumstances, as she must have a doctor and trained nurse and their house has no spare room down stairs. She is still almost entirely helpless and does not notice her surroundings. Lizzie's family are just now getting settled since the great earthquake. Their house had to be renovated all over. First came the house movers and put it back upon its foundations aright. Then the masons came and built the chimney which was thrown down. Then followed the plasterers, then the paper-hangers and [?], so that now the house is almost as good as new. But she says there has been an average of one earthquake shock a day ever since the first great shock, so that she has grown very nervous over them. The main portion of the Normal School building was condemned as unsafe, but they are using the wings and the exercises go on. (T.S.R. 52. 2 P.M. 67. S.S. 58.)

May 29. Tuesday. Laura Bruml is sick and Theresa has gone to stay with her a few days until she can get her nurse from Stockton. Alice Hammond called. Have written to the children in Humboldt County. (T.S.R. 50. 2 P.M. 70. S.S. 63.)

May 30. Wednes. Wonderful to relate I am this day seventy years old and Calvin is thirtyseven. It has been disappointing to human calculation that I should survive so many severe illnesses, but I can only praise the loving kindness of the dear Father who has thus spared me. And more wonderful still, I have my own hair, teeth and eyesight until now without artificial helps. This is not true of most people of my age, I am sure, and I do not record it boastfully, but only the more to praise the Lord for it. I will record the program for the day. First, mush and milk at about 5 o'clock in the morning and remainder of breakfast at 7 o'clock in bed, after a morning nap. Then rise and dress, water my house plants and bouquets, then write a letter or two or my diary, then read till noon. In the afternoon sew and read the daily paper. I have lately made a silk lounge quilt for