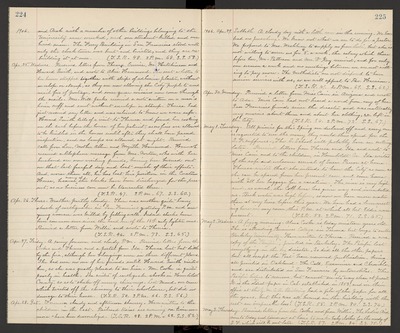 1906. and Arch with a number of other building belonging to the University were wrecked, and one student killed and one hired man. The Ferry Building in San Francisco stood well only the clock tower was bent and twisted, and they are re-building it at once. (T.S.R. 48. 2 P.M. 68. S.S. 58.)

Apr. 25. Wednes. Received letters from Theresa, Eunice, Mr. Hutchinson and Howard Smith, and wrote to Alice Hammond. She sent a letter to her home strapped together with strips of adhesive plaster, without envelope or stamp, as they are now allowing the City people to send mail free of postage, and some queer missives now come through the mails. Mrs. Will Jacks received a note written on a man's linen cuff and sent without envelope or stamp. Theresa had just received my letter and was relieved to know we were safe. Howard Smith tells of a visit to Theresa and found her cooking on the curb before the house of her patient, as no fires are allowed to be kindled in the houses until after they shall have passed inspection, and no lamps are allowed at night. Received calls from Lou. Mother Allen and Myrtle Hammond. Hannah received a telephone message from Mrs. Norton, who with her husband are now visiting friends, having been burned out on that last fearful day, and lost much of their effects - And, worse than all, he has lost his position in the Custom House, because many of the clerks have been discharged for the present, as no business can now be transacted there. (T.S.R. 47. 2 P.M. 67. S.S. 60.)

Apr. 26. Thurs. Weather partly cloudy. There was another quite heavy shock of earthquake in San Francisco yesterday P.M. and one young woman was killed by falling walls. Indeed shocks have been common ever since the hard one of the 18th only lighter ones. Received a letter from Willie and wrote to Theresa. (T.S.R. 46. 2 P.M. 73. S.S. 65.)

Apr. 27. Friday. A rainy forenoon and cloudy P.M. Received letters from the Cookes and Theresa and a postal from Ida. Theresa lost but little by the fire, although her belongings were in three different places. She had seen no one her friends until Howard Smith visited her, so she was greatly pleased to see him. Mr. Cooke is quite poorly in health. Ida writes of earthquake shocks in Humboldt County, so as to shake off many chimneys. Last Mond. one came which twisted off the chimney to their schoolhouse, but did no damage to their house. (T.S.R. 50. 2 P.M. 66. S.S. 56.)

1906. Apr. 29. Sabbath. A cloudy day with a little sun in the evening. We have had no preaching. We know not what we are to do for a pastor. We prepared to Mrs. Washburn to supply us from Lodi, but she is not willing to serve us for $5. a week, the salary which those before her, Mr. Patterson and Mr. DeKay received, and for only one sermon a week and no meetings between we are not willing to pay more. The Methodists are not disposed to have union services with us, so we will appeal to Rev. Harrison. (T.S.R. 49. 2 P.M. 69. S.S. 62.)

Apr. 30. Monday. Received a letter from Miss Cain in Arizona and wrote to Ada. Miss Cain not heard a word from any of her San Francisco friends since the disaster and was naturally very anxious about them and about her clothing, x.c. left in the City. (T.S.R. 54. 2 P.M. 73. S.S. 67.)

May 1. Tuesday. All picnics for this Spring are declared off and every one is requested to use the money they would thus spend for the S.F. sufferers. The S. School will probably have an outing later. Received letters from Theresa and Ida and wrote to Miss Cain and to the children in Humboldt Co. Ida writes of the safe and welcome arrival of Susie Pascoe at home. Theresa writes that she intends to leave the City as soon as she can be spared from her present case and come home with all her baggage for a vacation. The river is very high and, as usual, the Cobb levee has given way and inundated us. Back water was high before, so now we have more water than at any time before this year. We have had a levee meeting here in my room this P.M. at which all but Eddie were present. (T.S.R. 52. 2 P.M. 71. S.S. 65.)

May 2. Wednes. A foggy morning. Alma Cooke is today nineteen years old. She is attending Business College in Tacoma but longs to enter Berkeley University. Have written to Theresa. Received a wee copy of the "Pacific", printed in Berkeley. The Pacific lost everything in the big disaster. So did all the other papers but all except the "Post" have resumed publication, being all printed in Oakland - The Call, Examiner and Chronicle, and are distributed in San Francisco by automobiles. The Pacific hopes to resume, but cannot see its way clear at present. It is the oldest paper in Cal. established in 1853, and in their office at the Y.M.C.A. Building had a file of the paper for all the years, but this was all burned in the building with the rest an irreparable loss! (T.S.R. 55. 2 P.M. 80. S.S. 74.)