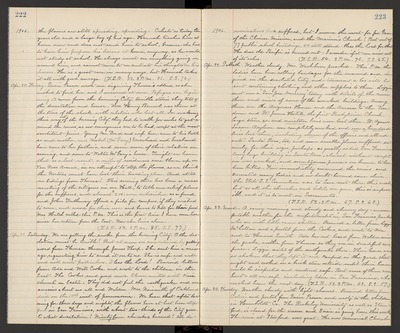 1906. the flames are still spreading, spreading. Celeste is today ten years old and a large boy of his age. Hannah teaches him at home now and does not sent him to school, because she had to have him prepare his lesson at home, anyway, as he would not study at school. He always must see everything going on around him, and cannot seem to concentrate his thoughts on his lessons. He is a great care in many ways, but Hannah takes it all with good courage. (T.S.R. 52. 2 P.M. 81. S.S. 74.)

Apr. 20. Friday. Susie Pascoe wrote me inquiring Theresa's address, as she wished to find her, and I answered at once. Refugees are beginning to come from the burning City, terrible stories they tell of the devastation and horror. Mrs. Henry Bruml was there at the time of the shock, with relations who lost all. In making this way out of the burning City, they had to walk for miles to get around the ruins, as no conveyances are to be had, except at the most exorbitant prices. Young Mr. Dowd and wife have come to his birth or and mother, and Mabel (McGary) Morehead and husband have come to her father's, and seven more of their relatives are coming, and some to Walter McGary's house. Tonight we learn that as a last resort, a mile of residences were blown up on Van Ness Avenue, in an attempt to stop the flames, so we think the Nortons must have lost their boarding place. And still no tidings from Theresa! This evening there has been a mass meeting of the citizens in our Hall, to talk over relief plans for the sufferers, and almost $200. were subscribed as a fund and John Tutheway offered a field for campers, if they wished to come, and wood for their use and beeves to kill for their food. Mrs. Hatch called this P.M. This is the first time I have seen her since her return from the East. Now she lives alone. (T.S.R. 54. 2 P.M. 85. S.S. 77.)

Apr. 21. Saturday. We are getting the smoke from the burning City. O the desolation must be terrible! But at noon we were relieved by getting word from Theresa through James Thorp. She sent him a message requesting him to send it on to us. She is safe and well and will write particulars. Bless the Lord! Received letters from Ada and Will Cooke and wrote to the children in the East. The Cookes send good news. Eleven united with their church on Easter. They did not feel the earthquake and are anxious about us all and Weldon. Mrs. Naismith of Oakland died on the 10th inst. of pneumonia. We hear that after burning for three days and nights, the flames have at last been stopped in San Francisco, with about two-thirds of the City gone. O what devastation! Ninetyfour churches burned! All denominations

Apr. 22. Sabbath. Weather cloudy. Mrs. Washburn preached. This P.M. the ladies have been rolling bandages for the maimed and injured in the desolated City, and tomorrow a box will be sent containing clothing and other supplies to them. Lizzie sent me a "San Jose Mercury" today with details of the ruin there and views of some of the wrecked buildings. Among them are the Anzerais House and the Annexes to the Vendome and St. James Hotels, the first Presbyterian Church, Large stores, x.c. and nineteen lives were lost there. St. Agnews Insane Asylum was completely wrecked and over a hundred lives lost there, including eleven of the officers and attendants. Santa Rosa, too, and some smaller places suffered severely, for their sizes, perhaps, as greatly as did San Francisco. Every large building in Santa Rosa, almost without exception was wrecked, and seventyseven persons are known to have been killed. Fire immediately consumed the ruins and cremated many bodies and no doubt burned some alive. The State S.S. Convention was to have met there this week but as all the churches and hotels are gone, this is impossible, and it is to meet in Sacramento. (T.S.R. 52. 2 P.M. 67. S.S. 63.)

Apr. 23. Mond. - A rainy morning and cloudy and showery day - uncomfortable weather for the unfortunates in San Francisco parks who are with little or no shelter. Received a letter from Lizzie McLellan and a postal from the Cookes, and wrote to Ada and to Howard Smith. Ada has not heard from Weldon since the quake, neither from Theresa so they are in dreadful suspense - Lizzie writes of the earthquake there. Their house was so shaken that they left it and camped in the yard that might and cooked on a brick stove outside until their house could be inspected and rendered safe. But none of them were hurt - all are safe, including Edna in San Francisco, who reached home the next day. (T.S.R. 52. 2 P.M. 63. S.S. 57.)

Apr. 24. Tuesday. Weather cloudy with light showers. Received letters from Calvin and postal from Susie Pascoe and wrote to the children in Humboldt Co. The Berkeley University as well as Stanford, is closed for the season and Susie is going home this week. The ruin at Stanford was great. The new Memorial Church