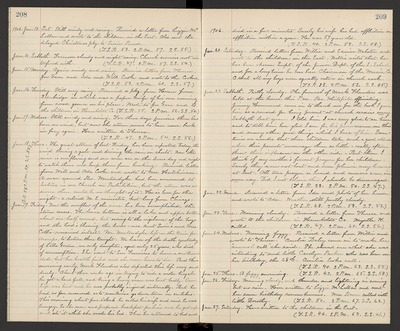 Jan. 18. Thurs. The great storm of last Friday has been repeated today, the wind blowing a gale and driving the rain in sheets. Now the river is over flowing and our men are on the levers day and night to watch them and keep them from breaking. Received letters from Will and Ada Cooke and wrote to Mrs. Hutchinson. A man named Rev. Woertendyke had been announced to lecture in our Church on Prohibition, but the storm was so severe there could be no thought of it. He is here for the night - a retired M.E. minister, not long from Chicago. (S.R. 55. 2 P.M. 59. S.S. 55.)

Jan. 19. Friday. Now the overflow of the river has been accomplished, the storm ceases. The lower bottom is all a lake and upper bottom about one-half covered, but owing to the vigilance of the boys and the Lord's blessing, the levees - ours, Aunt Susie's and Mrs. Cobb's - remained intact. Mr. Woertendyke left on the train for Acampo, to lecture there tonight. We learn of the death yesterday of Lilla Gordon, an only daughter, aged only 25 years, who died of consumption. She went to San Francisco to learn a milliner's trade but her health failed and she came home to die. And this morning early, Mark Flanders also departed this life very endenly. About three weeks ago in trying to ride a motor bicycle he got a hard fall, and bring a heavy man was hurt badly. One hip was hurt and he was probably injured internally. But he had so far recovered as to sometimes go down town on crutches. This morning about four o'clock he called his wife and said he was hungry. So she rose and prepared breakfast for him and he got up and ate it while she made his bed. Then he returned to bed and

Jan. 20. Saturday. Received letters from Willie and Eunice Webster and wrote to the children in the East. Willie writes that he has been chosen Supt. of the Junior Dept. of the S. School and for a long time he has been Chairman of the Music Co. O that all my boys were equally active in church work. (T.S.R. 33. 2 P.M. 52. S.S. 45.)

Jan. 21. Sabbath. Partly cloudy. The funeral of Mark Flanders was held at the house this P.M. Rev. Whitefield officiating. Jimmy Hammond came in to thank me for the book I gave him as a reward for being present at church services every Sabbath last year. I told him I was very glad to see him and to tell him how glad I am for his perseverance in this and many other good things which I hear of him. Sometimes we wonder that those children take such a good stand when their parents encourage them so little - really often throw their influence on the other side. But then I think of my mother's fervent prayers for her children. Surely they were not lost and even Johnnie may be saved at last. All time prayer is heard and answers come in some way. Did I not believe this I should be discouraged. (T.S.R. 33. 2 P.M. 50. S.S. 47.)

Jan. 24. Wednes. Morning foggy. Received a letter from Willie and wrote to Theresa. Amelia Daley came in to make her "annual call" she said. She showed me what she was intending to send little Carolyn Parker who was born on her birthday, the 28th. Amelia looks well. (T.S.R. 40. 2 P.M. 63. S.S. 55.)

Jan. 26. Friday. Morning cloudy, and thunder and lightning in evening but no rain. Have written to Lizzie McLellan and sent her some birthday remembrances. Mrs. Bower called with little Dorothy. (T.S.R. 50. 2 P.M. 67. S.S. 62.)