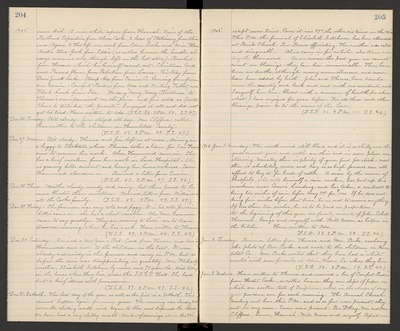 1905. sauce dish. A nice white apron from Hannah. Views of the Portland Exposition from Alma Cooke. 2 boxes of Stationery from Alice and Agnes. 2 Hdkfs. one each from Edna Locke and Miss Flaa. Arctic Stove-hook from Eddie (so called because the handle always remains cold though left on the hot stove). Bracket from Horace, which he himself carved out. Christmas Card and Pressed flower from Palestine from Louise. Pin-tray from Dean Jewett Locke. Stamp-box from Eunice C. Growing fern from our Eunice. Comfort Powders from Ada and Writing Tablet and Flesh-brush from Ida. We sang "Merry, Merry Christmas" to Theresa's accompaniment on the piano, and Jim acted as Santa Claus to distribute the presents. I enjoyed it all and did not get too tired. Have written to Ada. (T.S.R. 34. 2 P.M. 50. S.S. 47.)

Dec. 27. Wednes. Still cloudy. Theresa and Jim left us at noon, driving in a buggy to Stockton, where Theresa takes a train for San Francisco to resume her work. Alice Hammond came in. She has a brief vacation from her work in Lane Hospital. She is growing better content and losing her home sickness. Susie Hammond also came in. Received a letter from Eunice. (T.S.R. 43. 2 P.M. 47. S.S. 46.)

Dec. 30. Saturday. Received a New Year's Post-Card from Horace and Annie Hammond and wrote to the children in the East. It was cloudy and windy in the forenoon and rainy in P.M. but as before the rain was disappointing in quantity. Mrs. Fleharty's mother, Elisabeth Ketchum by name and 73 years old, died today in the house where they live, under the I.O.G.T. Hall. She had but a brief illness with pneumonia. (T.S.R. 37. 2 P.M. 47. S.S. 43.)

Dec. 31. Sabbath. The last day of the year as well as the first is a Sabbath. This cannot happen again for many years. The morning was cloudy but soon the chilling north wind began to blow and dispersed the clouds We have had a very chilly month-temp. of mornings all in the 30's

1905. except seven times. Once it was 29-, the other six times in the 40's. This P.M. the funeral of Elisabeth Ketchum has been attended at Brick Church. Rev. Brown officiating. The weather was cold and disagreeable. Alice came in for awhile, also Alma and Myrtle Hammond. As we review the past year we cannot count our blessing - they have been innumerable. There has been no deaths, although many severe illnesses, and none have been added by birth. John and Theresa have traveled across the country and back and met with no accidents, and I myself have been blessed with a measure of health for above what I have enjoyed for years before. For all these and other blessing, praise be to the name of the Lord. (T.S.R. 36. 2 P.M. 50. S.S. 46.)

1906. Jan. 1. Monday. The north wind still blows and it is so chilly and the grass cannot grow, and cattle are thin and in some places are starving. Usually there is plenty of green feed for stock - now there is absolutely none and hay is so high, farmers can ill afford to buy it for herds of cattle. A man by the name of Hatfield, who calls himself a rain-maker, has put up his machine near Crow's Landing, and has taken a contract to bring ten inches of rain before May 1st of $1000. If he does not bring five inches before that time, he is not to receive anything. If less than ten inches, he is to be paid in proportion. At the beginning of this year our family consists of John, Celeste. Hannah, George and myself, with Will Moore as helper in the kitchen. Have written to Ada. T.S.R. 33. 2 P.M. 52. S.S. 46.)

Jan. 3. Wednes. Have written to Theresa and received a box of "Comfort Powders" from Hester Cooke, so called because they are slips of paper on which are written texts of Scripture, rolled in the shape of druggists powders, one for each morning. The Annual Church Meeting met here this P.M. and as so few were present, they met in my room. Seven were present. Rev. DeKay, Mr. and Mrs. Clifford, Laura, Hannah, Will Moore and myself. Reports were