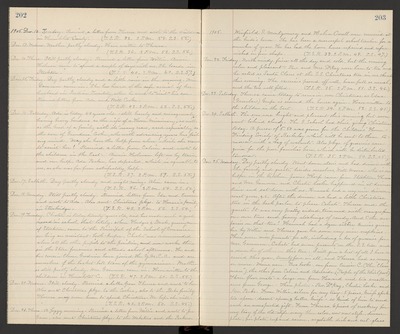 Dec. 16. Saturday. Ada is today 48 years old - still bravely and courageously bearing heavy burdens as the wife of a Home Missionary, as well as the head of a family with its many cases, and especially so the care of Grandma Cooke, who with advancing years has failing mind. May she have the help from above which she craves to assist her! Received a letter from Calvin and wrote to the children in the East. Annie Holman left us by train, and our help, Ada Parker, has departed, which is agreeable to us, as she was far from satisfactory help. (T.S.R. 37. 2 P.M. 59. S.S. 55.)

Dec. 19. Tuesday. Chester is today twenty years old, and has made such a good record in school, that lately, when Hedges & Buck, grocery men of Stockton, came to the Principal of the School of Commerce seeking an assistant book-keeper, Chester was recommended above all the other pupils to the position, and now works there in the Store forenoons and attends school afternoons. He and his cousin Elmer Goodwin have joined the Y.M.C.A. and are members of the basket-ball team of the gymnasium. Weather is still partly cloudy. Mrs. Gammon came in. Have written to the children in Humboldt Co. (T.S.R. 47. 2 P.M. 60. S.S. 55.)

Dec. 21. Thurs. A foggy morning. Received a letter from Willie and wrote to Jee Gam, also sent Christmas pkgs. to the Websters and the Parkers.

1905. Winfield S. Montgomery and Helen Corell were married at the bride's house. She has been a successful school teacher for a number of years. He has had the home house repaired and refurnished in fine shape. (T.S.R. 33. 2 P.M. 48. S.S. 47.)

Dec. 22. Friday. North windy, fierce all the day and cold, but the evening calm and pleasant. Rev. and Mrs. DeKay were here to tea and he acted as Santa Claus at the S.S. Christmas tree in our church this evening. The exercises passed off well, house full as usual, and the tree well filled. (T.S.R. 35. 2 P.M. 51. SS. 46.)

Dec. 24. Sabbath. The sun rose bright and pleasant this morning but soon went behind clouds. The S. School had their "giving" Christmas today. A purse of $5.50 was given for the Children's Home-Finding Society of Berkeley which will be sent to them tomorrow with a bag of walnuts. Also pkgs. of groceries were given for the poor families here, which will be distributed tomorrow. (T.S.R. 35. 2 P.M. 50. S.S. 45.)

Dec. 25. Monday. Day partly cloudy. Went down stairs and had dinner with the family and guests, besides ourselves, Will Moore who is our helper in the kitchen, James Thorp came from Stockton, Theresa and Mrs. Gammon and Chester Locke happened in at dinner time and sat down with us. Hannah had a very nice dinner, roast goose, x.c. After the dinner we had a little Christmas tree in the back parlor to please Celeste, Theresa and the guests. It was a very pretty indeed, trimmed with oranges from our own trees and fancy stockings of candy. And O the surprises on that tree! Hannah had a dozen silver knives given by her Willie and Theresa gave her some very nice napkins. There were nice presents for all, including a box of groceries for Mrs. Gammon. Celeste had seven presents on the S.S. tree and a number of others on this tree. I will give a list of all I have received this year, Twenty four in all, and Theresa had as many or more. Mine were. Two books - one from Eunice C. (The "Clansman"), the other from Calvin and Adelaide, ("People of the Whirlpool") There floor mats - a large one from Howard and two smaller ones from George - Three photos - Rev. DeKay, Chester Locke and Rev. Perks. From Willie, silver for my tray - 5 pieces, knife & fork tea-spoon - dessert spoon & butter knife - so kind of him to send such an unexpected gift. From Theresa 6 pieces of crockery for my tray of the old style navy-blue color, now new style, dinner plate, pie plate, cup and saucer, vegetable dish and cut-glass