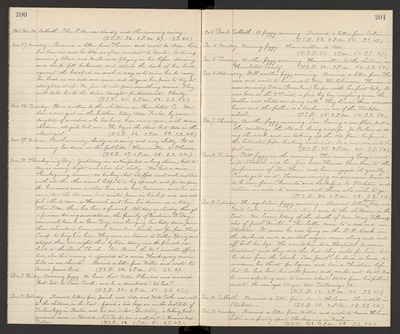 Nov. 27. Monday. Received a letter from Theresa and wrote to Ada. Lou has been in and has told us of an accident to Merle. Yesterday morning Alma and Merle were playing in bed before dressing and Merle fell backwards and struck the back of her head against the bed stead in such a way as to cause her to carry her head on one side ever since, and it gives her pain to try to straighten it up. We fear it will prove something serious. They will take her to the doctor tonight for treatment. Cloudy. (T.S.R. 41. 2 P.M. 52. S.S. 50.)

Nov. 30. Thanksgiving Day. Yesterday we anticipated a long storm, but today is sunny, bright and clear but chilly. We had a nice Thanksgiving dinner - no turkey - but stuffed roast veal instead with all the other usual helps to a big spread, and for company the Gammons were invited here, and Mrs. Gammon and her son came, but the old man had sciatic pain in his hip and did not feel able to come, so Hannah sent him his dinner on a tray. This P.M. there has been a funeral. All day yesterday through a furious, driving snowstorm, the family of Gardiner B. Day, commonly known as Garn Day, were bringing his body down from there mountain home, near Mountain Ranch, not far from Sheep Camp, to bury him here. They came in teams to Valley Spring and stayed there over night, then by train today, and the funeral was held at the Brick Church. Rev. Brown, the M.E. minister, officiated, also this evening he officiated at a union Thanksgiving service held in our church. Received a letter from Willie and wrote to Cousin James Reed. (T.S.R. 40. 2 P.M. 51. S.S. 49.

Dec. 2. Saturday. Received letters from Josiah and Ada and Will Cooke and wrote to the children in the East. Josiah's two boys are in the Institute of Technology in Boston, and his son-in-law, Dr. Ashley, is taking post-graduate course in Harvard, while Dr. A's son is a student in Harvard Med. College. (T.S.R. 33. 2 P.M. 51. S.S. 47.)

Dec. 6. Wednesday. Still another foggy morning. Received a letter from Theresa and wrote to her and to Mrs. Hutchinson. Theresa is now nursing Edna (Greenlaw) Grupe with her first baby. It was born on the 2nd inst. a fine big boy - weighing nine lbs. Mother and child are doing well. They live in their own new house and the father is a teacher in one of the Stockton schools. (T.S.R. 35. 2 P.M. 54. S.S. 50.)

Dec. 8. Friday. Still foggy in the morning. This evening George went into Stockton and he, Jim and Theresa have been to the performance of "Ben Hur" and have enjoyed it greatly. Crowds go to see it. Tomorrow evening an excursion train is to be run from Clements and Lockeford to Stockton and return in order to accommodate those who wish to go. (T.S.R. 30. 2 P.M. 58. S.S. 54.)

Dec. 9. Saturday. The regulation foggy morning. Received letters from Ada and Will Cooke and wrote to them and to the children in the East. We learn today of the death of Mrs. Mary Tallmadge also of Jacob Michl. The latter came to a sad end in Stockton. It seems he was lying on the R.R. track in the darkness and a switch engine came along and cut off both his legs. He was taken to a Hospital to receive treatment and they did the best they could for him but he died from the shock. Poor Jacob! he tried so hard to overcome his thirst for liquor and live a Christian life but he had lost his will power and could not do it. And he was expecting soon to receive about $30,000 from his father's estate. He was aged 54 yrs. Mrs. Tallmadge 70. (T.S.R. 32. 2 P.M. 54. S.S. 51.)