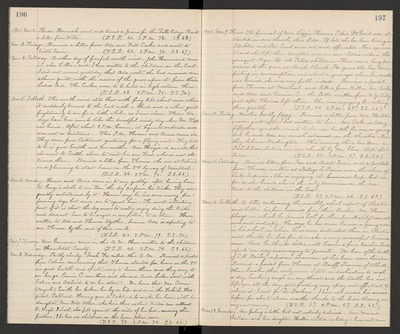 Nov. 4. Saturday. Another day of fearful north wind. John Hammond came in, also Lottie, and I have written to the children in the East. I did not record yesterday that Ada wrote she had received an album quilt, with the names of the givers upon it, from their Ladies Aid. The Cookes seem to be held in high esteem there. (T.S.R. 43. 2 P.M. 72. S.S. 70.)

Nov. 5. Sabbath. The north wind still blew with fury till about noon, when it suddenly turned to the East with a third and a whew quite frightening to me for a little while, as I was alone. These two days have been much like the dreadful windy day when Mr. Clapp was buried. After about 2 P.M. however, it began to subside and was not so boisterous. This P.M. Horace and Anna came in. They came from Oakland yesterday for a flying visit. They look to be in good health and her mother. Mrs. Hayis - is so well that she went to Seattle alone to visit her son Fred who is now stationed there. Received a letter from Theresa who was at Calvin's and planning to start home on the 3rd by way of Montreal. (T.S.R. 46. 2 P.M. 70. S.S. 66.)

Nov. 6. Monday. Horace and Anna came in to say goodbye after having been to George's stable to see "Tom" the dog perform his tricks. They were greatly entertained by it. Horace says he has seen, many performing dogs, but never one to equal him. The most interesting part of it is that the dog seems to really enjoy doing the tricks and does not have to be urged or compelled to do them. Have written to Ada and Theresa together, because Ada is expecting to see Theresa by the end of this week. (T.S.R. 42. 2 P.M. 79. S.S. 70.)

Nov. 8. Wednesday. Partly cloudy. Sarah Fox called this A.M. Received a postal from Calvin announcing that Theresa started for home on the 3rd in good health and spirits, sorry to leave them and they sorry to see her go. Eunice C. was there and she and Anna Locke went with Calvin and Adelaide to see her start. We learn that Mrs. Carrie (Megerle) Smith has broken her leg or hip and is in the Fabiola Hospital, Oakland. Having gone to Oakland to make her home with her daughter, Mrs. Will Allen, who lives there so that Nellie can attend O. High School, she fell against the side of her bed, causing the fracture. She has no children on the home place now. (T.S.R. 38. 2 P.M. 72. S.S. 62.)

1905. Nov. 9. Thurs. The funeral of Mrs. Lizzie Thomas Peters DeBoid was attended in our church this P.M. Of late she has been living in Stockton and Rev. Sink came out and officiated. Her age was 51 and she left three daughters and one son - Eddie - who is the youngest - 16 yrs. old. all Peters children. There was a long procession to the grave at Brick Church. For years she has been failing in consumption, and about a year ago, when her mother was buried, she was very feeble indeed. Received a postal from Theresa at Montreal, and letters from Willie, Mr. Cooke and Ada, and Eunice C. - the latter written from N.Y. City just after Theresa left them. She was enjoying her outing there greatly. (T.S.R. 40. 2 P.M. 67. S.S. 60.)

Nov. 10. Friday. Weather partly foggy. Received a letter from Mrs. Hutchinson, just after I had written to her. Mr. Cooke is today fifty three years old, much broken in health for one so young but he and Ada are much esteemed in the churches where they labor in Washington. This evening there has been a Prohibition lecture in our church by Mr. Glass, State Lecturer. (T.S.R. 37. 2 P.M. 67. S.S. 60.)

Nov. 11. Saturday. Received letters from Ida and Aunt Susie and a postal from Theresa, written at Portage le Prarie near the shore of Lake Superior. She is enjoying the homeward trip, but so far as she knows she is the only American on the car. Wrote to the children in the East. (T.S.R. 37. 2 P.M. 66. S.S. 63.)

Nov. 12. Sabbath. A letter containing the monthly school report of Chester and Lottie has been received from their teacher - Mr. Humphreys - in which he praises both for their punctuality, earnestness and industry. He says he has never known a young man in his school in whom he is more interested than in Chester and thinks he bids fair to make a very successful businessman. And he thinks Lottie will become a fine teacher. Such reports are very encouraging to parents. We hear of the death of C.K Bailey - a pioneer horseman at his home near Linden. Received a postal from Theresa at Banff, Province of Alberta. When I woke this early morn I felt an inclination to cough, a dry, hacking cough in my throat, and the trouble has not left me all the day, and finding my spray not effectual to relieve it, I sent for Dr. Barbour. I have not needed his services before for about eleven months - thanks to the Lord's blessing on my new remedy. (T.S.R. 37. 2 P.M. 67. S.S. 63.)

Nov. 13. Monday. Am feeling a little but not entirely relieved. Mrs. Minard Wallace and her daughter Hattie visited us today - have not seen