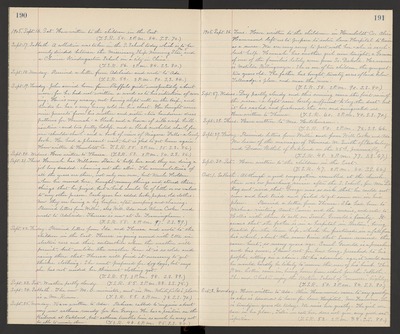 Sept. 19. Tuesday. John arrived home from Buffalo quite unexpectedly about noon, for he had not written a word as to his intention of coming. He is very weary, not having slept well on the trip, and besides he has a very heavy cold on his chest. He brought some nice presents from his mother and sister - two handsome dress patterns for Hannah - a black and brown of silk warp brilliantine - and two pretty hdkfs, and a black crocheted shawl for me - shoulder shawl - and a book of view of Niagara Falls - a lovely book. He had a pleasant visit, but is glad to get home again. Have written to Humboldt Co. T.S.R. 55. 2 P.M. 95. S.S. 86.)

Sept. 21. Thurs. Hannah has William Bair to help her and they are doing a job long dreaded - cleaning out the attic. The accumulations of all the years are there, not only our own, but Uncle Holden when he moved here, brought many things and stored there, things that he prized, but which would be of little or no value to any other person. Each year has added books, papers, old clothes. Now they are having a big bonfire, after sweeping and cleaning. Received letters from Willie, also Will, Ada and Alma Cooke and wrote to Adelaide. Theresa is now at So. Framingham. (T.S.R. 58. 2 P.M. 97. S.S. 89.)

Sep. 22. Friday. Received letters from Ida and Theresa and wrote to the children in the East. Theresa is going around with Etta in electric cars and their automobile when the weather will permit, but unlike the weather here it is so cold and rainy there that Theresa will find it necessary to get thicker clothing. She went prepared for dog days, but says she has not needed her thinnest clothing yet. (T.S.R. 59. 2 P.M. 98. S.S. 89.)

Sept. 25. Monday. Have written to Ada. Rebecca called to inquire about my new asthma remedy for her George. He has a position on the Railroad at Oakland, but asthma troubles him so much he may not be able to remain there. (T.S.R. 48. 2 P.M. 85. S.S. 80.)

1905. Sept. 26. Tues. Have written to the children in Humboldt Co. Alice Hammond left us to prepare to enter Lane Hospital to train as a nurse. We are very sorry to part with her - she is excellent help. Hannah has another girl come tonight, a German of one of the families lately come from So. Dakota. Her name is Matilda Billingmeyer. She is one of ten children, the youngest two years old. The father has bought twenty acres of land below Tallmadge's place, and near the river. (T.S.R. 58. 2 P.M. 90. S.S. 80.)

Sept. 27. Wednes. Day partly cloudy and this evening came the first rain of the season - a light rain barely sufficient to lay the dust - but it has washed and freshened the air and invigorated us. Have written to Theresa. (T.S.R. 60. 2 P.M. 80. S.S. 70.)

Oct. 1. Sabbath. Although a good congugation assembled at the church, there was no preaching service after the S. School, for Mr. DeKay sent word that George was so sick that he could not come and had tried and failed to get some one in his place. Received a letter from Theresa. She had been to Washua visiting Aunt Carrie and the cousins, and rode to Hollis with them to call on Saml. Gerould's family. It seems that the father is in a hospital in Boston, being treated for the lame hip, which he fractured in a full from his wheel, about the same time that Susie received the same hurt, so many years ago. Saml. Gerould is a preacher and has since, I know not for how long, preached to his people, sitting in a chair. At his advanced age, it would seem he would hardly be likely to recover the use of his limb. This P.M. Lottie came in, being home from school for the Sabbath. She and Chester enjoy the "Western School of Commerce" highly. (T.S.R. 50. 2 P.M. 84. S.S. 80.)

Oct. 2. Monday. Have written to Ada. Alice Hammond came to say goodbye as she is tomorrow to leave for Lane Hospital, San Francisco. She is twenty one years old today. We miss her greatly. The girl we have in her place, Tillie we call her, does not give very good satisfaction. (T.S.R. 52. 2 P.M. 88. S.S. 80.)