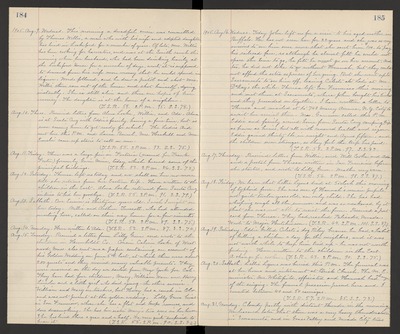 1905. Aug. 9. Wednes. This morning a dreadful crime was committed by Thomas Willis, a man who with his wife and adopted daughter has lived in Lockeford for a number of years. Of late, Mrs Willis has been cooking for harvesters, and was at the Smith ranch this morning when her husband, who had been drinking heavily at the Lockeford House for a number of days, went it is supposed to demand from his wife more money that he could spend in liquor. Words followed, and he drew a pistol and shot Mrs. Willis, then ran out of the house and shot himself, dying instantly. She still alive and there are hopes of her recovery. The daughter is at the home of a neighbor. (T.S.R. 59. 2 P.M. 25. S.S. 78.)

Aug. 12. Saturday. Theresa left us today and we shall see her no more till she returns from her Eastern trip. Have written to the children in the East. Alma Locke returned from Santa Cruz in time to bid her goodbye. (T.S.R. 55. 2 P.M. 91. S.S. 79.)

Aug. 15. Tuesday. Received a letter from Lilly Greve and wrote to the children in Humboldt Co. Cousin Calvin Locke of Westwood, Mass. also sent me a paper containing an account of his Golden Wedding on June 5th last, at which there were about 200 guests and they received many valuable presents. They were married on the day we sailed from New York for Cal. They have had four children, Mary, William Ware and Harry Lincoln and a little girl who died young - the others survive. William and Mary are teachers, but Harry, has a ranch in Colo. and was not present at the golden wedding. Lilly Greve lives in San Francisco, whose she has a flat and keeps roomers, and does dressmaking. She has her sister Mary's two sons in her house. She has lived there a year and a half. We were quite surprised to hear it. (T.S.R. 55. 2 P.M. 90. S.S. 82.)

1905. Aug. 16. Wednes. Today John left us for a visit to his aged mother in Buffalo. He has not seen her for 22 years and she was so very anxious to see him once more that she sent him $100. to pay his railroad fare, so although he almost felt he could not spare the time to go, he felt he must go on her account. And too, he did not like to go without Hannah, but they could not afford the extra expenses of her going. But she went up to Sacramento to see him off, leaving Celeste at Lodi at Mr. DeKay's the while. Theresa left San Francisco this morning and met them at Sacramento, where John bought his ticket and they proceeded on together. I have written a letter to Theresa and mailed it to 748 Marcy Avenue, N.Y. City to await her arrival there. Mrs. Gammon called this P.M. Eddie and family arrived home from Santa Cruz camping trip as brown as berries, but all with renewed health and vigor. Eddie gained thirty lbs. in weight and Agnes fifteen, and the children seem stronger, so they feel the trip has paid. (T.S.R. 58. 2 P.M. 97. S.S. 83.)

Aug. 17. Thursday. Received letters from Willie, and Will Cooke and Ada and a postal from Theresa written in San Francisco before she started, and wrote to Lilly Greve. Weather very warm. (T.S.R. 56. 2 P.M. 98. S.S. 87.)

Aug. 18. Friday. We learn that Lillie Lyons died at 5 o'clock this morning of typhoid fever. She was one of Hannah's music pupils, not quite twelve years old, an only child. She has had whooping cough all the summer and was so weakened, by it that she was not able to resist the fever. Received a postcard from Theresa. They had preached Palisades, Nevada. Wrote to Major Hutchinson. (T.S.R. 64. 2 P.M. 101. S.S. 87.)

Aug. 19. Saturday. Eddie killed Celeste's dog Riley because he had a habit of killing a chicken a day for the neighbors, and it was not worth while to keep him tied up - he was not worth feeding. Have written to the children in the East. A change for cooler. (T.S.R. 63. 2 P.M. 90. S.S. 75.)

Aug. 20. Sabbath. Lillie Lyons was buried this P.M. The funeral was at her home and interment at Brick Church. The M.E. minister, Mr. Whitefield, officiated and Hannah had charge of the singing. The funeral procession passed here and I counted between 40 and 50 carriages. (T.S.R. 57. 2 P.M. 85. S.S. 73.)

Aug. 21. Monday. Cloudy partly with distant thunder in the morning. We learned later that there was a very heavy thunderstorm in Sacramento, and in Grass Valley and Nevada City trees