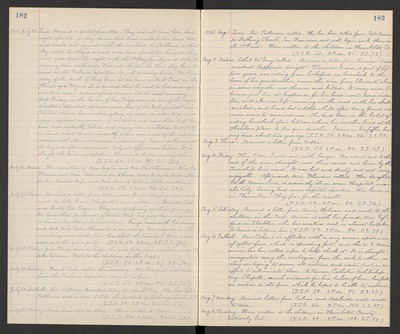 1905. July 25. Tues. Received a postal from Ada. They did not leave Lodi last night after all, for they found their train would be two hours late and would not connect with the overland to Portland, so that they would be obliged to wait somewhere for twelve hours, so they went, and spent the night with the DeKay family, and took the morning train northward. This will shorten the time they leave to spend at the Portland Exposition by just so many hours. We learn today of the death of Fred Grove at his home in West Point on the 7th inst, aged 84 years. It is rumored that he went to bed seemingly as well as usual, and was found dead in bed the next morning. Last Friday, in the harbor of San Diego, occurred one of the most disastrous steamboat explosions since that of the U.S. gunboat Maine. The U.S. steamer Bennington, getting up steam in order to go on a voyage, exploded one or more of her boilers and more than half her crew were instantly killed, and many more wounded. Out of 107 on board, about 60 were instantly killed, and most of the rest were scalded with steam or maimed in some way. Some were blown into the Bay and afterwards rescued. Only one officer was killed. It is thought the boiler was defective. These will be an investigation. (T.S.R. 56. 2 P.M. 95. S.S. 77.)

July 27. Thurs. Received a letter from Willie and two postals from Ada and wrote to Lilly Grove. The postals were written at Kennet, Cal. and Grants' Pass, Oregon. They were prospering on their journey. We learn that Joe Smart of Dutch Flat has just been married to Louise Runckel of the same place. George came with his surrey and took Miss Cain, Theresa and me riding. We rode across the river bridge and back. How beautiful the trees are! More and more so as the years go by. (T.S.R. 50. 2 P.M. 85. S.S. 70.)

Aug. 2. Wednes. Ethel McGary called. Received a letter from Eunice. A sad accident happened tonight. Florence Irvine, a girl of fifteen years, was riding from Lockeford on horseback to the home of her grandmother across the river from Clements, where in some way she was thrown and killed. It may never be known just how it happened, for her horse went home rider less, and she was left morning in the road with her skull crushed, and lived but a little while after being found and never came to consciousness. She had been in the habit of riding horseback often between whose her mother lived at the Harelson place to her grandmother Irvine's, her father having died about two yrs. ago. (T.S.R. 54. 2 P.M. 86. S.S. 70.)

Aug. 4. Friday. This P.M. I rode out with George. We went out to the end of the new, straight road, then across and home by the Township line road. It was hot and dusty and not very enjoyable. Afterwards Mrs. Flanders called. Her daughter Edith Miner Ives, is seriously ill in some Hospital near the City, having had some capital operation. His home is in Pleasanton. They fear for the result. (T.S.R. 52. 2 P.M. 86. S.S. 76.)

Aug. 6. Sabbath. New Orleans is afflicted with a very serious epidemic of yellow fever, which is spreading fast, and the U.S. Marine service has been called upon to help check it. It is thought mosquitoes carry the contagion from the sick to others, so they are trying to screen all cisterns and water pools in an effort to exterminate them. A Roman Catholic Archbishop. Mgr. Chapelle, much esteemed for his labors of love, has fallen victim to the fever, which he hoped to be able to restrain. (T.S.R. 58. 2 P.M. 97. S.S. 87.)