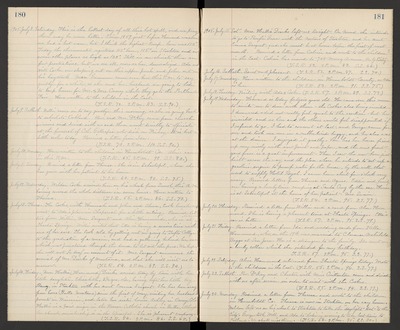 1905. July 8. Saturday. This is the hottest day of all this hot spell, and we pray there may be none hotter. Since 1859, just before Howard was born we had a hot wave, but I think the highest temp. here was 112-. Today the thermometer registered 113- here, 115- in Stockton and in some other places as high as 122-. Still in our climate there are few prostrations, but we are all, more or less, demoralized. Ada and Will Cooke are sleeping out on this upper porch and John out on his haystack. Mrs. Gammon came over here this P.M. to say goodbye for a while as she and her husband area going to Lodi to keep house for Mr. & Mrs. Curry while they go to the Portland Fair Have written to the children in the East. (T.S.R. 72. 2 P.M. 113. S.S. 90.)

July 9. Sabbath. Nellie came in to say goodbye this morning as she is going back to school to Oakland. Rev. and Mrs. DeKay came from church services and dined with us and then went directly to officiate at the funeral of Col. Gillespie who died on Friday. It is but a little cooler day. Received a letter from Ida. (T.S.R. 70. 2 P.M. 110. S.S. 90.)

July 13. Thurs. The Cookes with Hannah and John and Alma, took lunch and went to Ada's place in Chaparral for a little outing. Received letters from Willie, Mrs. Sargent and Alice Hammond, who is at or near Shasta Springs. Willie writes that Etta is having a serious time with one her ears. She took cold by getting wet in going to Tufts College to the graduation of a cousin, and had a gathering behind her ear which was punctured through the drum to let out the [?]. We hope she will not be deaf on account of it. Mrs. Sargent announces the arrival of Mrs. Dierks of Montana, and that she will visit us tomorrow. (T.S.R. 54. 2 P.M. 89. S.S. 74.)

July 14. Friday. Mrs. Hattie (Hammond) Dierks arrived today by train with her little daughter, Elisabeth, 3 1/2 yrs. old, having left her little boy, Barry, in Stockton with her aunt Emma Sargent. She has been away from home (Butte Montana) since the first of May, visiting her husband's parents in Wisconsin, and later her sister Louise Ashley in [?], Colo. Hattie is a paid singer in the Roman Catholic church in Butte, although her church membership is in the Episcopal. She is pleasant company. (T.S.R. 54. 2 P.M. 86. S.S. 68.)

July 19. Wednesday. Howard is today fortysix years old. He came over this morn to invite me to dine with them - the Cookes also being invited. I demurred - did not really feel equal to the exertion - but he insisted - and as Lou and the others would feel disappointed if I refused to go, I had to consent at last, and George came for me and took me over in a rubber tired buggy, and he also was at the dinner. I enjoyed it greatly. Lou has her house fixed up very nicely with new point and paper, and the new front yard fence is a great improvement. Then I sew the new barn just built across the way, and the place where he intends to set up a gasoline engine to pump water for the house, by the well that used to supply Hotel Royal. I came home about four o'clock very weary. Received letters from Theresa and Agnes. Eddie and family are having a lovely time camping at Santa Cruz by the sea. Theresa is at Sebastopol at the home of her patient. Mrs. Swain. (T.S.R. 54. 2 P.M. 95. S.S. 77.)

July 21. Friday. Received a letter from Ida and wedding cards from Stella Hammond, who, on the 19th was married to Clarence Archibald Baggs at San Jose. He is a stranger to the family. Ida sent me a lovely collar which she intended for my birthday. (T.S.R. 57. 2 P.M. 95. S.S. 77.)

July 24. Monday. Received a letter from Theresa and wrote to the children in Humboldt Co. Theresa is now in Stockton on her way home. Weldon left us on his wheel to Stockton to take the "daylight boat" to the City. George took Will and Ada to Lodi in evening to take last train to Portland. We shall miss them. (T.S.R. 56. 2 P.M. 95. S.S. 80.)