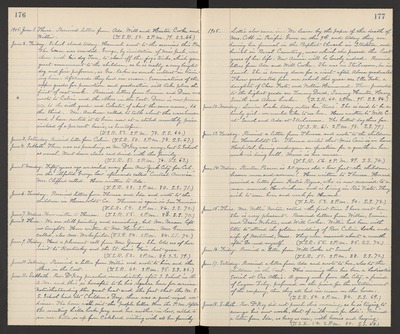 June 2. Friday. School closed today. Hannah went to the exercises this P.M. The horse was crowded. George, by invitation of Miss Jack, was there with his dog Tom. to show of the dog's tricks, which gave great amusement to the children, as he is really a very bright dog and fine performer, as Geo. takes so much interest in training him. Afterwards they had ice cream. Examinations of the upper grades for promotion and graduation will take place the first of next week. Received letters from Eunice and Dean and wrote to Calvin and the others in the East. Dean is now promoted to the sixth grade and Celeste, of about the same name. to the third. Mr. Ambrose called to talk about the warehouse and I have rented it to him now at a staled monthly price instead of a percent basis, as heretofore. (T.S.R. 53. 2 P.M. 78. S.S. 64.)

June 11. Sabbath. Rev. DeKay preached immediately after S. School in the A.M. and this is hereafter to be his regular hour for service. Notwithstanding the great heat and the fact that the M.E. S. School had its Children's Day, there was a good-seized audience. The hour will suit the people better than the P.M. After the meeting Lilla Locke Jory and her mother-in-law, called to see me. Lilla is up from Oakland visiting with all her family.

1905. Lottie also came in. We learn by the paper of the death of Mrs. Cobb in Pacific Grove on the 9th and today they are having her funeral in the Baptist Church in Stockton, and burial in Rural Cemetery, near which she passed the last years of her life. Now Annie will be lonely indeed. Received letters from Ada and Will Cooke. She was in Steilacoom, he in Sunol. She is coming down for a visit after Alma graduated. Those graduated from our school this year are Ella Foote, a daughter of Chas. Foote, and Nellie Hammond. Those promoted to the highest grade are Tommy Dowd, Sammy Hunter, Harry Smith and Alma Locke. (T.S.R. 60. 2 P.M. 95. S.S. 86.)

June 13. Tuesday. Received a letter from Theresa and wrote to the children in Humboldt Co. Theresa writes that Miss Cain is in Lane Hospital, having undergone an operation for a growth on her neck - is doing well. Marie is her nurse. (T.S.R. 56. 2 P.M. 89. S.S. 74.)

June 14. Wednes. Benton Pascoe is 20 years old - how fast the children become men and women! Have written to Theresa. Howard received a letter from Katie Ryno, who is now married to a man named Hendrickson and is living in Rio Vista. They wish to come here and work for Howard. (T.S.R. 53. 2 P.M. 90. S.S. 78.)

June 15. Thurs. Mrs. Nellie Norton called the first time I have met her. She is very pleasant. Received letters from Willie, Eunice and Dean Webster, and Will Cooke. Willie had been with Etta to attend the golden wedding of Rev. Calvin Locke and wife of Westwood, Mass. They were married about a month after Dr - and myself. (T.S.R. 55. 2 P.M. 85. S.S. 72.)

June 17. Saturday. Received a letter from Ada and wrote to her, also to the children in the East. This evening there has been a Ladies Aid Social at Ora Allen's. A young man from the City, a friend of Eugene Daley, performed on the piano, for the entertainment of the company, then they all had ice cream on the lawn. (T.S.R. 54. 2 P.M. 84. S.S. 69.)