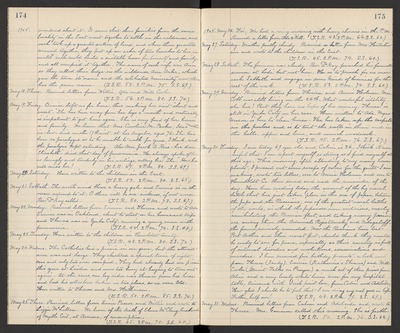 1905. wondered about it. It seems that three families from the same locality in the East went together to settle in the wilderness, and each took up a quarter section of land, and where these quarters cornered together, they put up an arbor of tree branches to live in until each could build a suitable house for himself and family, and all occupied it together. The name of each wife was Ann so they called their lodge in the wilderness, Ann Arbor, which gave the town its name and the celebrated University now there has the same name. (T.S.R. 53. 2 P.M. 75. S.S. 69.)

May 19. Friday. Eunice left us for home, thus making her visit "short and sweet". She has been away from her boys a month and naturally is impatient to get home again. She is very fond of her home and family. We learn that Mrs. Caroline M. Parker, Ida's mother in-law- died on the 17th inst. at Los Angeles, aged 76. She has been so paralyzed as to be unable to walk for years. I think, and the paralysis kept extending. Also Mrs. Jacob A. Rics - his dear "Elisabeth"- died that day of pneumonia. He always spoke of her so lovingly and tenderly in his writings, calling her "She". How he will miss her! (T.S.R. 47. 2 P.M. 82. S.S. 69.)

May 24. Wednes. The Catholics had a picnic in our grove, but the attendance was not large. They chartered a special train of eight cars and only two were occupied. They had already had one picnic this year at Linden and were too busy at haying to turn out again. At the races, one boy rider was thrown from his horse and had his collar bone broken in two places, so we were told. Have written to Theresa and Mrs. Hutchinson. (T.S.R. 50. 2 P.M. 85. S.S. 70.)

May 29. Monday. Received letters from Theresa and Annie Holman. Mrs. Cobb was still living on the 26th. What wonderful vitality she has! But they have no hope of her recovery. Theresa is still in Yuba City on her case. Have written to Ada. Negro Mason is here to clean house. He has taken up the carpets in the parlors and is to tint the walls in them and in the halls, upper and lower, and varnish woodwork. (T.S.R. 45. 2 P.M. 76. S.S. 67.)

May 30. Tuesday. I am today 69 yrs. old and Calvin is 36. I think it wonderful that I can report myself so strong as I find myself at this age. This morning, after attending to my many house plants, I pressed out some scraps of calico for the quilt I am making, wrote two letters, one to Annie Holman and one to Humboldt Co. then sewed and read the remainder of the day. Have been reading today the account of the big naval bottle that has just taken place in the sea of Japan between the Japs and the Russians, one of the greatest naval bottles of the world, in which the Japanese were victorious, nearly annihilating the Russian fleet, and taking many prisoners, among them the Admirals Rojestvensky and Nibagatoff, the former seriously wounded. Now the Russians have last Port Arthur and their naval fleet, should think they would be ready to sue for peace, especially as their country is full of internal disorders and revolutions, assassinations and murders. I have received five birthday presents - a book each from Theresa (Sandy), Eunice (Katherine's Sheaves) and Will Cooke (Quiet Talks on Prayer) a mush set of three pieces from Alice and a very lovely white linen cover for my hospital table, trimmed with Irish point lace, from Calvin and Adelaide. How glad I should be to feel that I am doing any real good in life. Father, help me! (T.S.R. 48. 2 P.M 79. S.S. 69.)