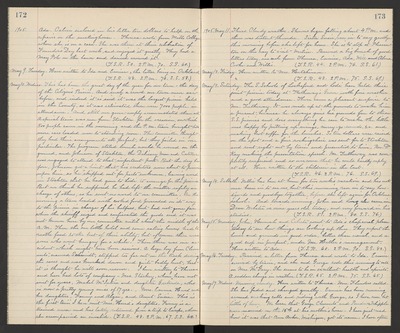 1905. Ada. Calvin enclosed in his letter ten dollars to help on the repairs on the meeting house. Theresa wrote from Mills College where she is on a case. She was there at their celebration of Founders Day last week, and enjoyed it greatly. They had a May Pole on the lawn and danced around it. (T.S.R. 50. 2 P.M. 70. S.S. 60.)

May 10. Wednes. This has been the great day of the year for our town - the day of the Citizen's Picnic. And such a crowd our town never saw before, and indeed it is said it was the largest picnic held in the County, as it was estimated there were 7000 people in attendance. And still our grove amply accommodated them all. A special train was run from Stockton for the occasion, on which 500 people came in the morning and the P.M. train brought two more cars loaded even to standing room. The committee thought they had their arrangements all perfect, but they failed in one particular. The program stated lunch would be served on the ground, and Johnson of Stockton, the Delicacy Man and Caterer was engaged to attend to that important part. But the day before, Johnson got a hint that his creditors were about to pounce, upon him, so he "skipped out" for parts unknown, leaving word in Stockton that he had gone to Lodi to arrange for the picnic. But we think he supposed he had left the matter safely in charge of others, so he sent no word to our committee. On the morning a team loaded with cooked food proceeded on its way to the picnic in charge of his helpers, but had not gone far when the sheriff seized and confiscated the goods and it was not known here by our committee until about the middle of the A.M. Then the one little hotel and some eating houses had to rustle food to the best of their ability, but of course there were some who went hungry for a while. Then there was one accident which might have been serious. A large boy from Clements, named Schmidt, stepped too far out on the track during the races and was knocked down and quite badly hurt, but it is thought he will soon recover. I have written to Theresa and have had lots of company - Mrs. Starkey, whom I have not met for years, Mabel McIntire and daughter Gertrude, who is now a pretty young miss of 17 yrs-, Mrs. Emma Hurd and her daughters, Fanny and Algie, and Aunt Susie. This is the first time I have met Mrs. Hurd's daughters. Fanny is a trained nurse and has lately returned from a trip to Europe, where she accompanied an invalid. (T.S.R. 48. 2 P.M. 67. S.S. 68.)

1905. May 11. Thurs. Cloudy weather. Showers began falling about 4 P.M. and there was distant thunder. Sister Susie ran in to say goodbye this morning before she left for home. She is to stop at Pleasanton on the way to visit Mertice. Received a big bunch of good letters today, one each from Theresa, Eunice, Ada, Will and Alma Cooke and Willie. (T.S.R. 44. 2 P.M. 76. S.S. 61.)

May 13. Saturday. The S.Schools of Lockeford and Lodi have held their joint picnic today at Tutheway's Grove with fine weather and a good attendance. There came a pleasant surprise to Mr. Tutheway. It was made up at the grounds to make him a present, because he always gives his grounds free to these S.S. picnics and does everything he can to make the little ones happy by putting up swings, merry-go-rounds, x.c. and making hot coffee for the lunches. So ten dollars were raised on the spot and a fine rocking chair was sent for the Stockton and sent right out by train and presented to him, Rev. DeKay making the presentation speech. Mr. Tutheway was completely surprised and so overcome that he could hardly reply at all. Have written to the children in the East. (T.S.R. 46. 2 P.M. 76. S.S. 69.)

May 14. Sabbath. Nellie has been at home for two weeks, vacation and has not once been in to see us, but this morning ran in to say how-dye-do and goodbye together, before she left again for Oakland school. And towards evening, John and [?] also came in. Dean Webster is nine years old today, and very forward in his studies. (T.S.R. 51. 2 P.M. 80. S.S. 76.)

May 15. Monday. John, Hannah and Celeste went to Ada's chaparal place today to see how things are looking up there. They report the house and grounds in good order, better than usual, and a good crop in prospect, under Mr. Hatler's management. Have written to Ada. (T.S.R. 60. 2 P.M. 90. S.S. 82.)

May 16. Tuesday. Received a letter from Theresa and wrote to Ida. Eunice arrived by train, and she and George rode this evening to call on Mrs. McGary. She seems to be in excellent health and spirits. A sudden change in weather. (T.S.R. 65. 2 P.M. 75. S.S. 65.)

May 17.Wednes. Morning cloudy. Have written to Theresa. Mrs. Flanders called. She has faded and changed greatly. Eunice has been running around making calls and riding with George, so I have seen but little of her. We learn that George Clements and [?] Whipple were married on the 15th at his mother's home. I have just read how it was that Ann Arbor, Michigan, got its name. I have often