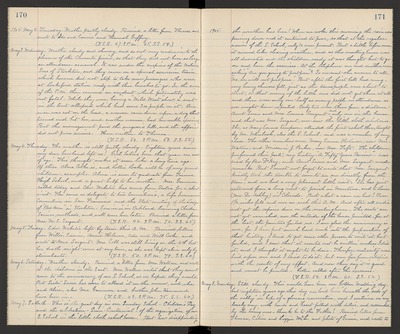 May 3. Wednesday. Weather cloudy and showery, and so not very conducive to the pleasure of the Clements picnic, so that they did not have so large an attendance as usual. It was under the auspices of the Native Sons of Stockton, and they came on a special excursion train, which however did not stop to take some passengers who were at Lockeford station ready with their lunches to go. In the course of the P.M. there occurred an accident which fortunately was not fatal. While they were having a "Wild West" show, a seat in the tent collapsed which had some 300 people on it. One man was cut on the head, a woman came down upon a dog that turned and bit her, and another woman had her ankle sprained. But the management paid the surgeon's bills, and the affair did not move serious. Have written to Theresa. (T.S.R. 50. 2 P.M. 58. S.S. 55.)

May 4. Thursday. The weather is still partly cloudy. Eighteen years since my dear husband left us! Girl babies born that year are now "of age." This thought makes it seem like a long time ago. Of these Alma Cooke is, and Lottie Locke will be of my grand children, examples. Alma is soon to graduate from Tacoma High School, and a great help to her mother. Mrs. Gammon called today and Edw. Webster has come from Scotia for a short visit. He came as delegate to two Convention's, a Life Insurance Convention in San Francisco, and the State meeting of the Lodge of "Red Men" in Stockton. Eunice is in Oakland learning Christian Science methods, and will come here later. Received a letter from Mrs. M.E. Sargent. (T.S.R. 46. 2 P.M. 72. S.S. 65.)

May 6. Saturday. Weather cloudy. Received a letter from Mrs. Wallace and wrote to the children in the East. Mrs. Wallace writes that they cannot come to the anniversary of our S. School, as we hoped they would. But Sister Susie has come to attend it on the morrow, and she and Alice, also Mrs. Gammon and brother John Hammond have been in. (T.S.R. 48. 2 P.M. 75. S.S. 60.)

May 7. Sabbath. This is the great day in our Sunday School - Children's Day and the celebration - Semi-Centennial - of the organization of our S. School in the "little cloth school house." But how disappointing

1905. the weather has been! When we work this morning, the rain was pouring down and it continued to pour, so that at the regular session of the S. School, only 12 were present. But a little before noon it seemed like clearing weather, and so the meeting house was all decorated and the children ready it was thought best to go on and have the exercises. At the telephone one and another were asking "Are you going to postpone?" So we sent the answer to all, "No, we will not postpone." But after the first bell had rung, very heavy showers fill, just as the towns people were about to start, so that many of the little ones did not get there at all and these were only one-half as many people in attendance as we might have expected. Only two were there from a distance - Aunt Susie and Mrs. Emma Sargent and only one in the house, and that was Mrs. Sargent, ever saw the little cloth school [?]. She, as Mary Emma Simpson, attended the first school there, taught by Mr. Wheelock, also the S. School, and was a member of my class. The other members were Mary Emma Holman, now Mrs. Watson, and Missouri J. Parker, now Mrs. Taft. The children performed their parts, my history "-A Fifty Years Review-" was read by Rev. DeKay, and Aunt Susie and Mrs. Sargent made remarks. But I must not forget to write that Mrs. Sargent kindly took the trouble to come to see one directly from the train, and we had a very pleasant little visit. She has just returned from a long visit to Josiah in Montana, and to Louise (Mrs. Dr. Ashley) in Colorado. But what a rain we had! Over 1 1/2 inches fill and over an inch this A.M. And after all we did not get the repairs done on the meeting house. The seats are not yet varnished, nor the outside of the house painted, for at the last, the painters failed us. I am glad the anniversary is over, for I have put much hard work into the preparation of that history. I tried to get some other person to write it, but failed, and I saw that it would not be written unless. I did it, and I thought it ought to be done. Therefore necessity was laid upon me and I tried to do it, but am far from satisfied with the result of my effort. And now they say it is good and must be printed. Lottie called after the exercises. (T.S.R. 54. 2 P.M. 60. S.S. 54.)

May 8. Monday. Still cloudy. This would have been our Golden Wedding day, but eighteen years ago this day we laid him "beneath the souls of the valley" in hope of a glorious resurrection, and I continue on my lonely way, with hands and heart filled with duties, and surrounded by the loving ones - thanks be to the Father! Received letters from Theresa, Calvin and Lizzie Mc.L. and photo of Gussie, and wrote to