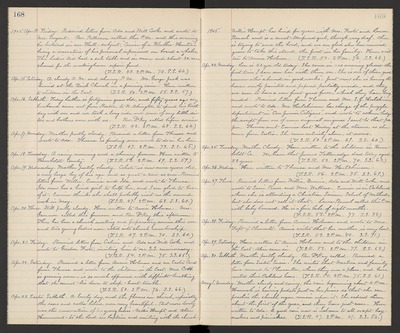 1905. Apr. 14. Friday. Received letters from Ada and Will Cooke and wrote to Mrs. Sargent. Rev. Patterson called this P.M. and this evening he lectured in our Hall - subject, "Cruise of a Blubber - Hunter." being a narrative of his personal experience on board a whaler. The Ladies Aid had a sale table and ice cream and about $30. were cleared for the meeting house repair fund. (T.S.R. 48. 2 P.M. 74. S.S. 64.)

Apr. 16. Sabbath. Today Luther is fortynine years old, and fifty years ago my husband came out from Boston to N. Abington to spend his birthday with me and we took a long ride, and some of my little sisters and brothers were with us. Rev. DeKay called before service. (T.S.R. 42. 2 P.M. 68. S.S. 64.)

Apr. 19. Wednesday. Weather partly cloudy. Celeste is now nine years old, a very large boy of his age and as great a can as ever. Received letters from Willie, Eunice and Ida, and wrote to Theresa. Ida now has a hired girl to help her, and I am glad to hear of it. Eunice thinks she shall probably visit us the second week in May. (T.S.R. 47. 2 P.M. 68. S.S. 60.)

Apr. 20. Thurs. Still partly cloudy. Have written to Annie Holman. Mrs. Gammon called this forenoon and Rev. DeKay this afternoon. There has been a church meeting and preparatory service this eve and two young ladies were voted into church membership. (T.S.R. 47. 2 P.M. 70. S.S. 60.)

Apr. 22. Saturday. Received a letter from Annie Holman and an Easter Card from Theresa and wrote to the children in the East. Mrs. Cobb is growing worse - is so much oppressed with difficult breathing that she cannot - lie down to sleep - heart trouble. (T.S.R. 50. 2 P.M. 76. S.S. 66.)

Apr. 23. Easter Sabbath. A lovely day, and the flowers in church, especially the roses and calla lilies, were very beautiful. But more lovely was the consecration of two young ladies - Nelli Haupt and Alice Hammond - to the Lord in baptism and visiting with the church.

1905. Nellie Haupt has lived for years with Mrs. Foote and Laura Bruml and is a sweet-tempered girl, though very deaf, Alice is trying to serve the Lord, and we are glad she has received grace to take this stand, the first in her family. Have written to Annie Holman. (T.S.R. 52. 2 P.M. 76. S.S. 68.)

Apr. 24. Monday. Lou is 42 yrs. old today. She came in - is wearing glasses - the first time I have seen her with them on. She is one of those good women who "abound in good works". Just now she is having the house newly painted and papered partially inside, and they are soon to have a new front yard fence, which they have long needed. Received letters from Theresa and Mrs. S.J. Hutchinson and wrote to Ada. Mrs. Hutchinson has charge of the puzzle department in "One Junior Citizens", and wrote to acknowledge the receipt from me of some original enigmas I sent to that paper. Theresa met Eunice last Friday at the steamer as she came from Scotia. she came entirely alone, it seems. (T.S.R. 50. 2 P.M. 69. S.S. 60.)

Apr. 27. Thurs. Received letters from Willie, Eunice, Ada and Will Cooke and wrote to Susie Pascoe and Mrs. Wallace. Eunice is in Oakland where she is attending a Christian Science School of Methods, but she does not call it that. Laura Bruml called this P.M. with baby Leonard. He is a fine babe of eight months. (T.S.R. 53. 2 P.M. 77. S.S. 73.)

Apr. 30. Sabbath. Weather partly cloudy. Rev. DeKay Called. Received a letter from Sister Susie. She writes that Mertice and family have moved to Pleasanton, where they own a place, and have rented their Oakland home. (T.S.R. 50. 2 P.M. 75. S.S. 61.)

May 1. Monday. Weather cloudy and rainy, the rain beginning about 4 P.M. Hannah is having pedals put on her piano so that she can practice the church organ music upon it. She ordered them about the first of the year, and they have just come. Have written to Ada. A good rain now is welcome to all except haymakers and picnickers. (T.S.R. 47. 2 P.M. 69. S.S. 54.)