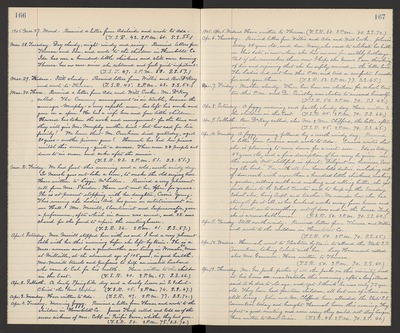 Mar. 28. Tuesday. Day cloudy, night windy and rainy. Received letters from Theresa and Ida. and wrote to the children in Humboldt Co. Ida has over hundred little chickens and still more coming. Theresa has no case since she returned and feels quite impatient. (T.S.R. 47. 2 P.M. 58. S.S. 57.)

Mar. 30. Thurs. Received a letter from Ada and Will Cooke. Mr. DeKay called. The Creamery management is in trouble, because the manager - Murphy - a very capable man, has left his work and gone on a spree. He has a wife here and four little children. Howard has taken the work and management for the time and they will give Mr. Murphy another trial - but how sad for his family! We learn that Mr. Overhiser died yesterday, aged 80 years - another pioneer gone! Hannah has had her piano recital this evening - quite a success. There were 28 people sat down to ice cream and cake after the music. (T.S.R. 43. 2 P.M. 51. S.S. 51.)

Mar. 31. Friday. We had frost this morning and a cold, with windy day. So March goes out like a lion, to make the old saying true. Have written to Lizzie McLellan. Received a very pleasant call from Mrs. Sherden. Have not met her before for years. She is at present stopping with her daughter, Cassie Young. This evening the Ladies Aid has given an entertainment in our Hall. Mrs. Merrill, Elocutionist and Impersonator, gave a performance, after which ice cream was served, and $25. was cleared for the fund to repair the meeting house. (T.S.R. 36. 2 P.M. 61. S.S. 57.)

Apr. 1. Saturday. Mrs. Merrill stopped here with us and I had a very pleasant talk with her this morning before she left by train. She is a Mass. woman and has a grandmother now living in Worcester Co. Mass. at Milleville, at the advanced age of 105 years, in good health. Mrs. Merrill travels and performs to help an invalid husband who came to Cal. for his health. Have written to the children in the East. (T.S.R. 40. 2 P.M. 67. S.S. 66.)

Apr. 4. Tuesday. Morning foggy. Received a letter from Theresa and wrote to the children in Humboldt Co. James Thorp called and told us of the severe sickness of Mrs. Cobb in Pacific Grove, whither they had gone. (T.S.R. 50. 2 P.M. 75. S.S. 70.)

Apr. 6. Thursday. Received letter from Willie and Ada and Will Cooke. John's today 48 years old, and dear Mary, who used to celebrate her birth on this date, is now where she has no use for earthly birthdays. But if she remembers them now I hope she knows I am thinking of her and rejoicing that she has safely arrived in the "better land." The Ladies Aid met here this P.M. and tied an comforter I made for and gave them. (T.S.R. 52. 2 P.M. 77. S.S. 65.)

Apr. 10. Monday. A foggy morning followed by a north windy day. Received a letter from Eunice and wrote to Ada. Eunice writes that she is planning to come down for a visit soon. Ida is today 43 years old, and a fine description of her may be given in the words, "not slothful in spirit, Diligent in business, Serving the Lord." For with all her household duties, including out-of-door work with more than a hundred little chickens, making a garden, selling milk and making and selling butter, she yet finds time to be School Trustee and to keep up the Sunday School also, being Supt. and teacher. We wonder how she has strength for it all, as her husband works away from home and she must see to everything, out-of-doors and in the house. Truly she is a remarkable woman. (T.S.R. 50. 2 P.M. 70. S.S. 64.)

Apr. 13. Thursday. Mr. Geo. Jack, father of all the Jacks in this vicinity, died at his home near Waterloo this morning, after a long illness said to be due to old age, and yet I think he was only 73 yrs. old. They have had fourteen children, all but one of whom are still living. John and Mr. Clifford have attended the State S.S. Convention today and brought Hannah home this evening. They report a good meeting and were sorry they could not stay longer. Have written to Aunt Susie. (T.S.R. 48. 2 P.M. 70. S.S. 60.)