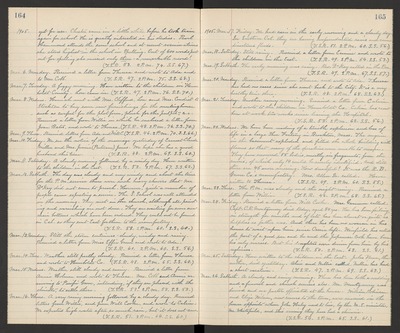 1905. yet for use. Chester came in a little while before he took train again for school. He is greatly interested in his studies. Pearl Hammond attends the same school and at recent examinations she stood highest in the school in spelling. Out of 600 words put out for spelling she missed only three - a remarkable record! (T.S.R. 53. 2 P.M. 74. S.S. 67.)

Mar. 8. Wednes. Hannah went with Mrs. Clifford, Lou and Mrs. Condict to Stockton to buy some new furnishings for the meeting house such as carpet for the platform, plush for the pulpit, x.c. Received a letter from Willie in which he enclosed a letter from Joan Bates, and wrote to Theresa. (T.S.R. 48. 2 P.M. 76. S.S. 70.)

Mar. 12. Sabbath. The day was cloudy and very windy and about the time for the P.M. service there were such heavy showers that Mr. DeKay did not come to preach. However, quite a number of people came expecting a service. The S. School was well attended in the morning. They met in the church, although all painting and varnishing are not done. They are waiting for some new chair bottoms which have been ordered. They could not be found in Cal. so they sent East for them to the manufactory. (T.S.R. 58. 2 P.M. 60. S.S. 60.)

Mar. 15. Wednes. Weather still cloudy and rainy. Received a letter from Annie Holman and wrote to Theresa. Mrs. Cobb and Annie are moving to Pacific Grove, intending, if they are pleased with the climate, to settle there. (T.S.R. 53. 2 P.M. 58. S.S. 58.)

Mar. 22. Wednes. We have been reading of a terrible explosion and loss of life in a large Shoe Factory in Brockton, Mass. The engine in the basement exploded and filled the whole building with flames so that many of the operations were unable to escape. They have recorded 55 bodies, mostly in fragments, from the ruins, of which only 14 could be surely identified. And still there are 45 more missing. How dreadful! it was the R.B. Grover Co.'s manufactory. Mrs. Allen Sr. called. Have written to Theresa. (T.S.R. 49. 2 P.M. 60. S.S. 55.)

Mar. 24. Friday. Received a letter from Will Cooke. Mrs. Gammon called. Capt. C.R. Montgomery died today, aged 84 yrs. He has been failing in strength for months and of late has been almost or quite as helpless as father was. And there has been no woman in his house to wait upon him since Carrie left. Winfield has acted the part of a good son and he and the Japanese Cook have been his only nurses. But his daughters were driven from him by his ugliness. (T.S.R. 50. 2 P.M. 68. S.S. 61.)

Mar. 26. Sabbath. A cloudy and rainy morning. There has been both a wedding and a funeral and church services also. Mr. Montgomery was buried and our pastor officiated at the house. William Robinson and Eliza Wilson, new comers to the town, were married in the house opposite where John Haley used to live, by the M.E. minister, Mr. Whitefield, and this evening they have had a chivaric. (T.S.R. 54. 2 P.M. 65. S.S. 61.)