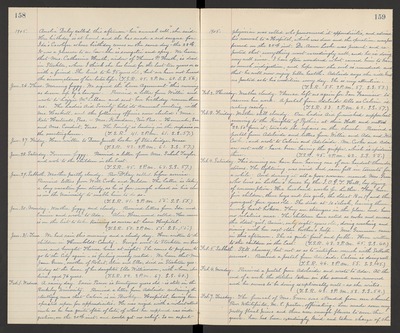 1905. Amelia Daley called this afternoon - her "annual call," she said. Her birthday is at hand and she has made a red sacque for Ida's Carolyn whose birthday comes on the same day. The 28th. It was a pleasure to see her - she is energetic and spry. We learn that Mrs. Catherine Heath, widow of Thomas P. Heath, is dead in Stockton, where I think she has lived for the last ten years or so with a friend. She lived to be 95 years old, but we have not heard the circumstances of her later life. (T.S.R. 45. 2P.M. 60. S.S. 56.)

Jan. 26. Thurs. Morning foggy. We signed the "Levee Agreement" this morning as drawn up by a lawyer. Received a letter from Willie and wrote to Lizzie McLellan and sent her birthday remembrances. The Ladies Aid Society held its annual meeting with Mrs. Haskell, and the following officers were elected. Mrs. Kate Hartwell, Pres. - Mrs. Knudsen, Vice Pres. - Hannah, Sec. and Mrs. Condict, Treas. The Society is leading in the repairs on the meeting house. (T.S.R. 41. 2 P.M. 61. S.S. 57.)

Jan. 29. Sabbath. Weather partly cloudy. Rev. DeKay called before service. Received letters form Will Cooke and Weldon. The latter is taking a long vacation from study, as he is far enough ahead in his class is in the University to enable him to do so. (T.S.R. 41. 2 P.M. 55. S.S. 55.)

Jan. 31. Tues. We had rain this morning and a cloudy day. Have written to the children in Humboldt County. George went to Stockton on business, and brought Theresa home at night. She comes to prepare to go to the City again - is feeling nicely rested. We learn that Mrs. Jane Green, mother of Robert, Alice and Ella, died in Stockton yesterday at the house of her daughter Ella Williamson, with whom she lived, aged 76 years. (T.S.R. 54. 2 P.M. 67. S.S. 60.)

Feb. 1. Wednes. A rainy day. Susie Pascoe is twenty one years old - is still in the Berkeley University. Received a letter from Adelaide containing the startling news that Calvin is in Brooklyn Hospital, having been operated upon for appendicitis. He was seized with a violent attack such as he has quite often of late, of what he supposed was indigestion, on the 20th inst. and could get no relief. So an expert

1905. physician was called who pronounced it appendicitis, and advised his removal to a Hospital, which was done and the operation was performed on the 24th inst. Dr. Anna Locke was present and reported that everything went exceedingly well, and he is doing very well since. I have often wondered what caused him to have so much indigestion, and hope not the evil is remedied and that he will now enjoy better health. Adelaide says she will keep us posted as to his condition every day. She is very attentive. (T.S.R. 55. 2 P.M. 57. S.S. 53.)

Feb. 3. Friday. Weather still cloudy. Our Ladies Aid furnished supper last evening to the Knights of Pythias at their Hall and netted $22.50 from it, towards the repairs on the church. Received a postal from Adelaide and letters from Willie and Ada and Will Cooke, and wrote to Calvin and Adelaide. Mr. Cooke and Ada are not well - have been having the grippe, which is epidemic there. (T.S.R. 45. 2 P.M. 62. S.S. 55.)

Feb. 4. Saturday. This evening we have been having one of our hardest thunder storms. The lighting was vivid and rain fell in torrents for a while. And during it all a poor woman named Mrs. Green who lives in Luther's house by the I.O.G.T. Hall, lay dying of consumption. Her husband works for Luther. They have five children, three boys and two girls, the oldest 18 or 19 and the youngest four years old. She died at 10 o'clock, leaving them nearly heart-broken. They are strangers in the place and have no relatives near. The children have acted as cooks and nurses, the oldest girl, Annie, only eight years old, doing washing and ironing with her next older brother's help. Mrs. Gammon came in this afternoon. She is quite frail and feeble. Have written to the children in the East. (T.S.R. 43. 2 P.M. 65. S.S. 60.)

Feb. 7. Tuesday. The funeral of Mrs. Green was attended from our church Rev. Whitefield, M.E. pastor, officiating. Lou made some very pretty floral pieces and there were enough flowers to cover the grave. Lou has been exceedingly kind and taken charge of the