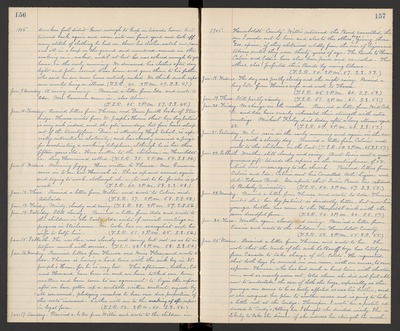 1905 drunken fool didn't know enough to keep on towards home but turned back again and came into our front yard and took off every stitch of clothing he had on, threw his clothes, watch and purse and all in a heap on the ground and wandered around in the soaking rain, naked, until at last he was sobered enough to get home, in the early morning. We discovered his clothes after day light and John carried them home and gave them to his father who said his son came home entirely naked. We think such exposure would bring on illness. (T.S.R. 40. 2 P.M. 48. S.S. 47.)

Jan. 10. Tuesday. Received letters from Theresa and Dean Jewett Locke of Sturbridge. Theresa writes from St. Joseph's Home that her boy patient is very sick indeed and she gets, somedays, but four hours sleep out of the twentyfour. Dean is attending High School, is especially interested in electricity, and has already received a prize for constructing a working telephone, although he is less than fifteen years old. Have written to the children in Humboldt Co. Lucy Hammond called. (T.S.R. 35. 2 P.M. 54. S.S. 48.)

Jan. 16. Monday. Received letters from Theresa and Miss Flaa, and wrote to Ada. Theresa is having a hard time with the sick boy in St. Joseph's Home, for he is very low. This afternoon, Luther, Ed. and Howard have been in and we have talked over levee matters and have come to an agreement to begin the repairs after we have gotten up a suitable written contract, signed by all concerned, pledging ourselves to bear our due proportion of the costs incurred. Luther will see to the making of the papers in legal form. (T.S.R. 52. 2 P.M. 60. S.S. 56.)

Jan. 17. Tuesday. Received a letter from Willie and wrote to the children in

1905. Humboldt County. Willie returned the Bond cancelled, the one I made out to him and also to the others boys giving them $300. apiece, if they abstained wholly from the use of liquor and tobacco until they were thirty years of age. The Bonds to Horace Calvin and Eddie have also been paid and cancelled. The others, also! forfeited their Bonds by using tobacco. (T.S.R. 50. 2 P.M. 57. S.S. 53.)

Jan. 22. Sabbath. Weather still cloudy and rainy. Aunt Susie sent a most generous gift towards the repairs on the meeting house of $50. which was encouraging to the church. Received letters from Calvin and Ida. Calvin sent his Cancelled Anti-Liquor and Anti-Tobacco Bond. Ida reports that Susie Pascoe has returned to Berkeley University. (T.S.R. 54. 2 P.M. 57. S.S. 55.)

Jan. 23. Monday. Received a letter from Theresa and wrote to Ada. Theresa writes that her boy patient is decidedly better, but now his younger brother has come to the Hospital sick with the same dreadful fever. (T.S.R. 46. 2 P.M. 64. S.S. 57.)

Jan. 25. Wednes. Received a letter from Theresa and wrote to her. She wrote that the Uncle of the sick Le Beouff boys has lately come from Canada to take charge of the Estate. He requested that both boys be nursed in one room, with one nurse, to save expense. Theresa, who has had such a hard time with the older one, and is nearly worn out, told them she did not feel able now to undertake the case of both the boys, especially as the younger one seems to be a badly affected as was his brother, and so she resigned her place to another nurse and is going to take a little rest at the Condys. Thereupon I wrote her a postal addressed to Condy's, telling her I thought she decided wisely. She is likely to take the disease if she reduces her strength too much.