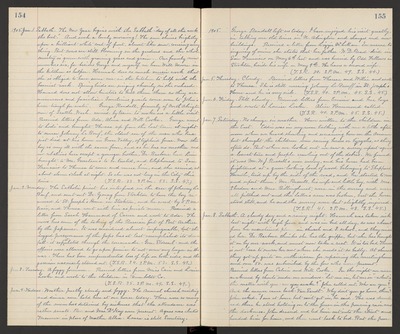 1905. Jan. 1. Sabbath. The New Year begins with the Sabbath - "day of all the week the best." And such a lovely morning! The sun shines brightly upon a brilliant white coat of frost, almost like snow, covering everything. But roses are still blooming in the gardens and the whole country is green with growing grass and grain. Our family now numbers six, for besides George and myself we have Will Moore in the kitchen as helper. Hannah does so much music work that she is obliged to have some one in the kitchen to help with the heaviest work. Spring birds are singing cheerily in the orchard. Howard does not allow hunters to kill them there so they are numerous and familiar. Sometimes quails come even to John's horse -trough for water. George Randall, formerly of North Abington now of Seattle, Wash. arrived by train to make us a little visit. Received letters from Ada, Alma and Will Cooke. George went to Lodi and brought Theresa up from the last train at night to nurse Johnny Le Bouf, the oldest son of the man who has just died at his home in Goose Valley, of typhoid fever. Now the boy is very ill with the same fever, and as he has no mother and no relatives here except a younger brother, Dr. Barbour had him brought to Mr. Garretson's to be treated, and telephoned to San Francisco to Theresa to come and nurse him, and she arrived at about eleven o'clock at night. So she was not long in the City this time. (T.S.R. 33. 2 P.M. 52. S.S. 47.)

Jan. 2. Monday. The Catholic priest has interfered in the case of Johnny Le Bouf, and sent out Dr. Young from Stockton to have the boy removed to St. Joseph's Home in Stockton, and he went by 5 P.M train, and Theresa went with him as private nurse. Received a letter from Sarah Hammond of Carver and wrote to Ada. The news has come of the taking of the Russian fort of Port Arthur by the Japanese. It was considered almost impregnable, but the dogged perseverance of the Japs has at last accomplished its down fall - it capitulated through the commander - Gen. Stoessel - and the officers were allowed to go upon promise to not serve any longer in the war. There has been unprecedented loss of life on both sides, and the garrison was nearly starved out. (T.S.R. 34. 2 P.M. 53. S.S. 48.)

Jan. 4. Wednes. Weather partly cloudy and foggy. The annual church meeting and dinner were held here at our house today. There were so many of the members detained by sickness that the attendance was rather small. Rev. And Mr. DeKay were present. Agnes was elected Treasurer in place of Mother Allen. Laura is still Secretary.

1905. George Randall left us today. I have enjoyed his visit greatly, in talking our old time in N. Abington and changes and new buildings. Received a letter from Lizzie McLellan. In answer to inquiry of mine she states that her father - W.D.Read - died in San Francisco on May 6th last and was buried by Odd Fellows in Stockton, beside his wife on May 9th. He leaves a second wife. (T.S.R. 30. 2 P.M. 49. S.S. 44.)

Jan. 7. Saturday. No change in weather. Have written to the children in the East. Eddie was in my room talking with me a little afternoon when we heard shouting and screaming here on the Avenue but thought the children were racing horses or bicycles, as they often do. But when we looked out we saw a surrey upset against a locust tree and people crawling out of the debris. We found it was Mr. W.J. Russell's nice surrey, and his horse had been frightened at a queer looking load of wood belonging to Sheppard Hundle, tied up by the side of the road, and he started to run and upset them. Mr. Russell, his wife and little boy, with Mrs. Sherdan and Mrs. Billinghurst, were in the surrey and were all pitched out and the latter's arm was broken, but the horse stood still, and he and the surrey were but slightly injured. (T.S.R. 41. 2 P.M. 48. S.S. 45.)

Jan. 8. Sabbath. A cloudy day and a rainy night. Hannah was taken sick last night with high fever and was in bed all day, so was absent from her accustomed place in church and S. school, and they missed her. Dr. Barobour thinks she has the grippe, but she has brought it on by over-work, and must now take a rest. It is too bad Theresa is not here to nurse her now when she needs it so badly. At church they got up quite an enthusiasm for repairing the meeting house and over $50. was subscribed by the few who were present. Received letters from Calvin and Will Cooke. In the night we were awakened by shouts under our windows - "Let me in, let me in" - what's the matter with you - are you awake?" John called out, "Who are you?" And the answer came back - "Van Sandt". Why don't you go home, then?" John asked. "I am at home but can't get in," he said. He was drunk and there he stood holding on to the fence in the pouring rain and the darkness. John dressed and led him out into the street and headed him for home, and then went back to bed. But the poor