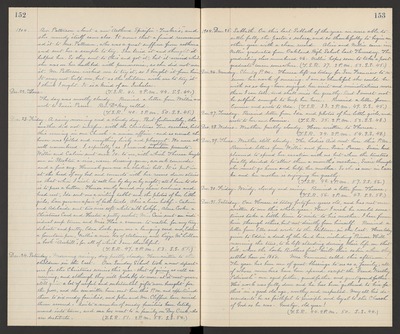 1904. Rev. Patterson about a new "Asthma Specific - Tucker's," and the remedy itself came also. It seems that a friend recommended it to Mrs. Patterson, who was a great sufferer from Asthma and sent her a sample to try. She tried it and thought it helped her. So they sent to Ohio and got it, but it arrived while she was on her death bed with pneumonia, so she did not use it. Mr. Patterson wished me to try it, so I bought it from him. It may not help me, but as the children wish me to try it I think I ought. It is a kind of an Inhaler. (T.S.R. 41. 2 P.M. 44. S.S. 44.)

Dec. 23. Friday. A rainy morning and a cloudy day. But fortunately, the weather did not interfere with the Christmas Tree exercises, held this evening in our Church - a union affair - and as usual the house was filled and everything lively and pleasant. We were all well remembered - I, especially - as I received eighteen presents. Willie and Calvin sent each $10. to me, with which Theresa bought one in Stockton a nice, warm dressing-gown, an oak commode and a fine rug. Hannah gave me an electric bell. It is put in at the head of my bed and connects with her rooms down stairs so that when I wish to call her by day or by night, all I have to do is to press a button. Theresa newly covered my chair cushions and head rest, Ida sent me a writing tablet and the photos of her little girls, Lou gave me a pair of bath towels, Alice a linen hdkf. - Calvin and Adelaide sent two nice soft white silk hdkfs., Alma Cooke a Christmas Card and Hester a pretty sachet, Miss Cain sent an individual soup tureen and Miss Flaa a creamer to match, for my tray, delicate and pretty, Edna Locke gave me a hanging card and Eddie a fountain pen, Nelli a nice box of stationery and Lizze McLellan a book- "Avehill," for all of which I am thankful. (T.S.R. 47. 2 P.M. 53. S.S. 51.)

Dec. 24. Saturday. Morning rainy, day partly cloudy. Have written to the children in the East. Our Sunday School took a new departure for the Christmas services this year - that of giving as well as receiving, and although they will probably do more at it next year, still quite a lot of useful and substantial gifts were brought for the poor, and the committee have met here this P.M. and apportioned them to six needy families, and John and Mr. Clifford have carried them around. Quite a number of needy families have lately moved into town, and box went to a family on Day Creek, who are destitute. (T.S.R. 51. 2 P.M. 58. S.S. 52.)

1904. Dec. 25. Sabbath. On this last Sabbath of the year we were able to settle fully the pastor's salary, and so thankfully to begin another year with a clean record. Alice and Nellie came in. Nellie graduated from Oakland High School last Thursday. The graduating class numbered 46. Nellie hopes soon to take a post- graduate course somewhat. (T.S.R. 37. 2 P.M. 52. S.S. 45.)

Dec. 26. Monday. Cloudy P.M. Theresa left us today for San Francisco to resume her work of nursing. I am so thankful she could be with us so long - have enjoyed her visit and ministrations more than I can tell, and shall miss her greatly. But I must not be selfish enough to keep her here. Received a letter from Eunice and wrote to Ada. (T.S.R. 33. 2 P.M. 49. S.S. 45.)

Dec. 29. Thurs. Weather still cloudy. The Ladies Aid met here this P.M. Received letters from Willie and from Susie Pascoe. Susie had planned to spend her vacation with us but when the trustees finally decided to allow them a month's vacation, Susie thought she must go home and help her mother. So she is now in Eureka and her mother is enjoying greatly. (T.S.R. 48. 2 P.M. 57. S.S. 56.)

Dec. 31. Saturday. Our Horace is today forty four years old, and has not once written to me this whole year. How I wish he would sometimes take a little time to write to his mother. I hear from him through others, but not directly from himself. Received a letter from Etta and wrote to the children in the East. Have today given to Eddie a deed of the land here including "Pioneer Hill" reserving the trees, to be left standing during their life on that hill, where the Locke Brothers first built their cabin when they settled here in 1850. Mrs Gammon called this afternoon. The year has been one of great blessings to us a family, all of whose members have been spared except the "Grand Worthy Patriarch" - our aged father, grandfather and great grand father. His work was fully done and he has been "gathered to his fathers" in a good old age, worthy and respected. May all his descendants be as faithful to principle and loyal to the Church of God as he was. Goodbye, old year! (T.S.R. 44. 2 P.M. 50. S.S. 44.)