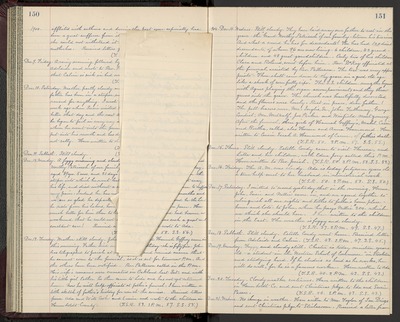 1904. afflicted with asthma and during the past year especially has been a great sufferer from it [?] she could not withstand it. [?] motherless. Received letters [?] [?]

Dec. 13. Tuesday. Weather still cloudy - John [?] Hannah Geffroy came in this morning. Father died on [?] - she is fiftyfive. John has telegraphed to Josiah at [?] and received answer that he cannot come to the funeral, so it is set for tomorrow P.M. and the others have been notified. Rev. Patterson called in the P.M. His wife's remains were cremated in Oakland last Sat. and with his little girl Esther he then came to Lodi and has not yet returned home. Now he will help officiate at father's funeral. I have written a little sketch of father's history for use at the services. Received a letters from Ada and Will Cooke and Eunice and wrote to the children in Humboldt County. (T.S.R. 53. 2P.M. 57. S.S. 55.)

1904. Dec. 14. Wednes. Still cloudy. They have laid away our father to rest in the grave - the "Grand Worthy Patriarch" of our family - between his two wives. And what a record he has for descendants! He has had 120 direct descendants, of whom 96 are now living - 6 children, 42 grandchildren and 48 great - grandchildren. Only two of his children Clara and Roland, went before him. Rev. DeKay officiated at the funeral, assisted by Rev. Patterson. The text was very appropriate- "Thou shall come down to thy grave in a good old age like a shock of corn fully ripe." The S.S. children sung the hymn with Agnes playing the organ accompaniment, and they threw greens into the grave. The church was beautifully decorated and the flowers were lovely. Rest in peace, dear father! The pall-bearers were, Mr. Inglis, Sr., John Tretheway, George Condict, Mr. Metcalf, Joe Parker and Winfield Montgomery. After the funeral, three girls of Hannah Geffroy's, Mabel, Carrie and Bertha, called, also Horace and Anna Hammond. Have written to Cousin Sarah A. Hammond of Carver, of father's death. (T.S.R. 50. 2 P.M. 57. S.S. 55.)

Dec. 17. Saturday. I omitted to record yesterday that in the morning, Horace, John, Susie and Nettie came in, and we agreed together to relinquish all our rights and titles to father's home place - house and lots - to John, when he pays Nettie $200. which we think she should have. I have written to the children in the East. The weather is foggy and cloudy. (T.S.R. 37. 2 P.M. 49. S.S. 47.)

Dec. 21. Wednes. No change in weather. Have written to Mrs. Taylor of San Diego and sent Christmas pkgs. to Steilacoom. Received a letter from