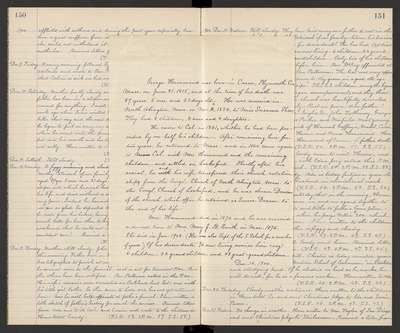 1904. afflicted with asthma and during the past year especially has been a great sufferer from [?] she could not withstand it [?] motherless. Received letters [?] [?]

Dec. 13. Tuesday. Weather still cloudy - John [?] this morning. Father died on [?] has telegraphed to Josiah at [?] he cannot come to the funeral, so it is set for tomorrow P.M. And the others have been notified. Rev. Patterson called in the P.M. His wife's remains were cremated in Oakland last Sat. and with his little girl Esther he then came to Lodi and has not yet returned home. Now he will help officiate at father's funeral. I have written a little sketch of father's history for use at the services. Received letters from Ada and Will Cooke and Eunice and wrote to the children in Humboldt County. (T.S.R. 53. 2 P.M. 57. S.S. 55.)

Dec. 21. No change in weather. Have written to Mrs. Taylor of San Diego and sent Christmas pkgs. to Steilcoom. Received a letter from

George Hammond was born in Carver, Plymouth Co. Mass. on June 21, 1815, and at the time of his death was 89 years, 5 mos. and 21 days old. He was married in North Abington. Mass. on Nov. 6, 1834, to Miss Susanna Shaw They had 8 children, 4 sons and 4 daughters. He came to Cal. in 1861, whither he had been preceded by one half his children. After remaining here for two years, he returned to Mass. and in 1864 came again to Cal. with Mrs. Hammond and the remaining children, and settled in Lockeford. Shortly after his arrival, he and his wife, transferred their church relationship from the Congl. Church of North Abington, Mass. to the Congl. Church of Lockeford, and he was chosen Deacon of the church, which office he retained as Senior Deacon to the end of his life. Mrs. Hammond died in 1874 and he was married a second time to Mrs. Mary J.B. Smith in Mar. 1876. She died in Jan. 1903. (He was also Supt. of the S. School for a number of years.) Of his descendants, 96 now living survive him - viz! 6 children, 42 grandchildren and 48 great-grandchildren. Dec. 12, 1904.