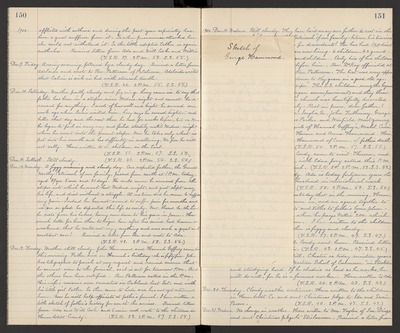 1904. afflicted with asthma and during the past year especially has been a great sufferer from it. So when pneumonia attacked her she could not withstand it. So the little adopted Esther is again motherless. Received letters from Ada and Will Cooke and Willie. (T.S.R. 37. 2 P.M. 58. S.S. 55.)

Dec. 9. Friday. A rainy morning, followed by a cloudy day. Received a letter from Adelaide and wrote to Rev. Patterson of Petaluma. Adelaide writes that Calvin is sick in bed with stomach trouble. (T.S.R. 46. 2 P.M. 55. S.S. 55.)

Dec. 10. Saturday. Weather partly cloudy and fog rainy. Lucy came in to say that father has been in a stupor since Wednes. night and cannot be aroused for anything. I wrote of how well and bright he seemed one week ago when Susie visited him. Lucy says he seemed brighter and better that day and the next than he had for weeks before, but on Mon. he began to fail in every way and failed steadily until Wednes. night when he went into the present stupor. Now he takes only what is put into his mouth and has difficulty in swallowing. We fear he will not sally. Have written to the children in the East. (T.S.R. 51. 2 P.M. 57. S.S. 53.)

Dec. 12. Monday. A foggy morning and cloudy day. Our respected father, the Grand Worthy Patriarch of our family, passed from earth at 1 P.M. today, aged 89 yrs. 5 mos. and 21 days. He could never be aroused from the stupor into which he went last Wednes. night, and just slept away his life, and died without a struggle. At no time did he seem to suffer any pain. Indeed he has not seemed to suffer pain for months and we are so glad he departed this life so easily. Now, blessed be the Lord he rests from his labors, having come down to his grave in peace. How much better for him than to linger here after his mind had become so weakened that he could not enjoy anything and was such a great and constant care! Received a letter from Ida and wrote to Ada. (T.S.R. 48. 2 P.M. 58. S.S. 56.)

Dec. 13. Tuesday. Weather still cloudy - John Hammond and Hannah Geffroy came in this morning. Father died on Hannah's birthday - she is fifty five. John has telegraphed to Josiah at my request and received answer that he cannot come to the funeral, so it set for tomorrow P.M. And the others have been notified. Rev. Patterson called in the P.M. His wife's remains were cremated in Oakland last Sat. and with his little girl Esther he these came to Lodi and has not yet returned home. Now he will help officiate at father's funeral. I have written a little sketch of father's history for use at the services. Received letters from Ada and Will Cooke and Eunice and wrote to the children in Humboldt Country. (T.S.R. 53.2 P.M. 57. S.S.55.)

Dec. 21. Wednes. No change in weather. Have written to Mrs. Taylor of San Diego and sent Christmas pkgs. to Steilacoom. Received a letter from