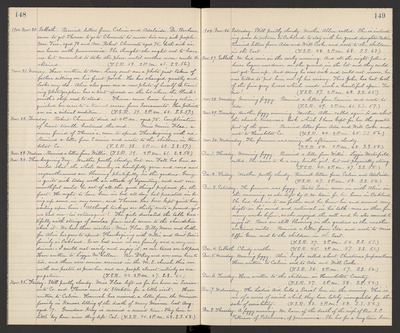 1904. Nov. 20. Sabbath. Received letters from Calvin and Adelaide. Dr. Barbour came to get Theresa to go the Clements to nurse two very sick people. Mrs. Tice, aged 78 and Mr. Robert Clements aged 75, both sick in one house with pneumonia. She thought she ought not to leave me but consented to take the place until another nurse could be obtained. (T.S.R 43. 2 P.M. 61. S.S. 56.)

Nov. 21. Monday. Have written to Ada. Lucy sent me a photo just taken of father sitting on his front porch. He has changed greatly and looks very old. Alice also gave me a new photo of herself. A traveling photographer has a tent spread on the lot where the Blacksmith's shop used to stand. Theresa came home having relinquished her cases to a trained nurse from Sacramento. Her patients are in a critical conditions. (T.S.R. 39. 2 P.M. 64. S.S. 57.)

Nov. 22. Tuesday. Robert Clements died at 4 P.M. aged 75. Complication of heart trouble hastened the end. Miss Marie Flaa, a nurse friend of Theresa's, came to spend Thanksgiving with us. Received a letter from Eunice and wrote to the children in Humboldt Co. (T.S.R. 38. 2 P.M. 62. S.S. 57.)

Nov. 24. Thanksgiving Day. Weather partly cloudy, but our Fall has been so mild that the whole country is beautifully green and roses and crysanthemums are blooming plentifully in the gardens. George is quite sick today with an attack of dysentery, and not one mouthful could he eat of all the good things prepared for the feast. He ought to have been in bed all day but persisted in being up some in my room, and Theresa has been kept quite busy waiting upon him. Although turkeys are thirty cents a pound yet we had one - too extravagant! The girls decorated the table beautifully with strings of similar from each corner to the chandelier above it. We had three visitors - Miss Flaa, Billy Moore and Luther for Alice has gone to spend Thanksgiving with Nellie and Aunt Susie's family in Oakland. So we had nine in our family and a very nice dinner - I could rest easily and enjoy it, as our taxes are all paid. Have written to Lizzie McLellan. Rev. DeKay and son were here to tea, and there were union services in the M.E. church this eve with our pastor as preacher and our people almost entirely as congregation. (T.S.R. 42. 2 P.M. 67. S.S. 62.)

Nov. 25. Friday. Still partly cloudy. Miss Flaa left us for her home in Sacramento Co. and Theresa went to Stockton for a little visit. Have written to Calvin. Hannah has received a letter from the Minner family in Kansas, telling of the death of Mary Minner last Aug. aged 17. Grandma Kray is married a second time. They have a little boy born since they left Cal. (T.S.R. 40. 2 P.M. 68. S.S. 63.)

Nov. 27. Sabbath. We had rain in the early morning. And all the night John's horse Logan was down on the ground, in the lot and they could not get him up. And seeing he was sick and could not recover, he was killed to put him out of his misery. Thus John has lost both of the fine grey horses which made such a beautiful span. Too bad! (T.S.R. 57. 2 P.M. 68. S.S. 65.)

Nov. 29. Tuesday. Another foggy morning. Mother Allen called again to see about the church treasurer's book which I have kept for her the greater part of the year. Received letters from Ada and Will Cooke and wrote to Humboldt Co. (T.S.R. 44. 2 P.M. 65. S.S. 56.)

Dec. 3. Saturday. The forenoon was foggy. Sister Susie came in with Alice in the morning, as she left by A.M. train for her home in Oakland. She had been in to see father and he knew her and seemed very bright in his mind and rational in his talk more so those for many weeks before, so she enjoyed the call and he also seemed to enjoy it. Roses are still blooming in the gardens as the weather continues mild. Received a letter from Ida and wrote to Miss Effie Green and to the children in the East. (T.S.R. 37. 2 P.M. 54. S.S. 51.)

Dec. 8. Thursday. A foggy morning. We learn of the death of the wife of Rev. S.C. Patterson of Petaluma, of pneumonia. She has for a long time been