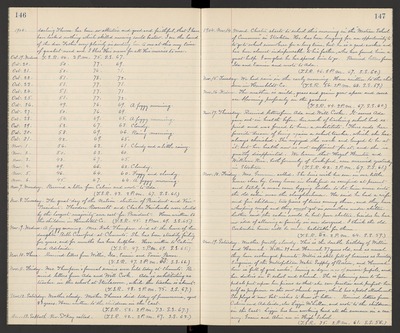 1904. darling Theresa has been so attentive and good and faithful, that I have have lacked nothing which skilled nursing could bestow. I see the hand of the dear Father very plainly in sending her to me at this my time of greatest need and I bless His name for all His mercies to me.

Nov. 8. Tuesday. The great day of the Nation - election of President and Vice-President. Theodore Roosevelt and Charles Fairbanks were elected by the largest majority ever cast for President. Have written to the children in Humboldt Co. (T.S.R. 45. 2 P.M. 69. S.S. 65.)

Nov. 9. Wednes. A foggy morning. Mrs. Kate Thompson died at the home of her daughter - Belle Crawford at Clements. She has been steadily failing for years, and for months has been helpless. Have written to Calvin and Adelaide. (T.S.R. 47. 2 P.M. 69. S.S. 65.)

Nov. 11. Friday. Mrs. Thompson's funeral services were held today at Clements. Received letters from Ada and Will Cooke. Ada is substituting as teacher in the school at Steilacoom, while the teacher is absent. (T.S.R. 48. 2 P.M. 75. S.S. 67.)

1904. Nov. 14. Mond. Chester starts to school this morning in the "Western School of Commerce" in Stockton. He has been longing for an opportunity to to go to school somewhere for a long time, but he is a good worker and has been almost indispensable to his father, who has found him a great help. I am glad he has spared him to go. Received letters from Ida and Eunice and wrote to Ada. (T.S.R. 46. 2 P.M. 67. S.S. 62.)

Nov. 17. Thursday. Received letters from Ada and Will Cooke. It seems Ada gave out in health before her week of teaching school had expired and was forced to have a substitute. Thus ends her favorite dream of being again a school teacher, which she has always cherished. She enjoyed the work and longed to be at it, but her health now is not sufficient for it, and she is greatly disappointed. We learn that Hazel Hunter and William Rice, both formerly of Lockeford, were married yesterday in Stockton. (T.S.R. 42. 2 P.M. 67. S.S. 61.)

Nov. 18. Friday. Mrs. Gammon called. She lives with her son in our little house close by. Every house in Lockeford is occupied at present and lately a man came begging Luther to let him move into the old cabin near the slaughter house. He said he had a wife and five children, two pairs of turns among them, and they have whooping cough and they must get in somewhere under shelter. Luther said the cabin would be but poor shelter, besides he has no idea of allowing a family in our dooryard. I think the old Corborubia house will be made habitable for them. (T.S.R. 52. 2 P.M. 64. S.S. 59.)

Nov. 19. Saturday. Weather partly cloudy. This is the double birthday of Willie and Hannah. Willie 39 and Hannah 37 years old, and as usual they have exchanged presents. Willie is still full of business as Sanitary Engineer of the Metropolitan Water Supply of Boston, and Hannah here is "full of good works," having a dozen or so of music pupils, and her duties in S. school and church. She is planning soon to have pedals put upon her piano so that she can practice and perfect herself as performer on the new church organ, which has a pedal attachment. She plays it now but wishes to know it better. Received letters from Calvin and Adelaide, also Lizzie McLellan, and wrote to the children in the East. Lizzie has been working hard all the summer in a cannery. [?] and Alice are in High School. (T.S.R. 35. 2 P.M. 61. S.S. 56.)