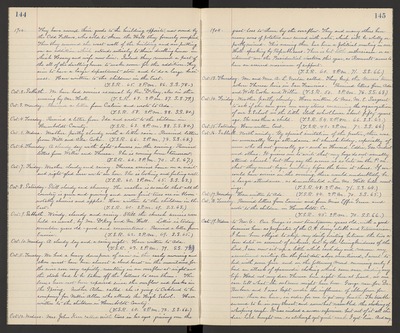 1904. They have moved their goods to the building opposite, now owned by the Odd Fellows, who sold to them the Hall they formerly occupied. Then they removed the west wall of the building and are putting on an addition which extends entirely to their dwelling house in which Henry and wife now live. Indeed they removed a part of the all of the dwelling house to make room for the addition. They aim to have a large department store and to do a large business. Have written to the children in the East. (T.S.R. 65. 2 P.M. 86. S.S. 78.)

Oct. 8. Saturday. Still cloudy and showery. The weather is so mild that all the country is green and growing and some first trees are in bloom notably cherries and apples. Have written to the children in the East. (T.S.R. 60. 2 P.M. 69. S.S. 63.)

Oct. 11. Tuesday. We had a heavy down pour of rain in the early morning and there must have been almost a cloud burst in the mountains, for the river rose very rapidly, resulting in an overflow at night and the stock had to be taken off the bottoms to save them. The levers have not been repaired since the overflow and breaks in the Spring. Mother Allen called - she is going to Oakland to be company for Nellie Allen who attends the High School. Have written to the children in Humboldt County. (T.S.R. 60. 2 P.M. 72. S.S. 66.)

Oct. 12. Wednes. Mrs. John Kerr called with tears in her eyes - grieving over the

1904. great loss to them by the overflow. They and many others have many acres of potatoes now covered with water, which will be wholly or partly ruined. This evening there has been a political meeting in our Hall - speaking by Republicans. There is but little enthusiasm or excitement over the Presidential election this year, as Roosevelt seems to have an assured maximum of support. (T.S.R. 60. 2 P.M. 71. S.S. 66.)

Oct. 14. Friday. Weather partly cloudy. Have written to Mrs. M.E. Sargent to ask if she can give me any items concerning the organization of our S. School in the little cloth schoolhouse about fifty years ago. She was then a child. (T.S.R. 54. 2 P.M. 66. S.S. 62.)

Oct. 16. Sabbath. North windy. By special invitation of the pastor, there was an unusually large attendance at church today, especially of men who do not generally go - such as Howard, Eddie, Geo. Condict and others. It grieves me to write that my boys do not usually attend church, but they say the service is so late in the P.M. that they must begin milking before the time it closes. If we could have service in the evening, there would undoubtedly be a large attendance, as demonstrated where Mr. Hall held meetings. (T.S.R. 48. 2 P.M. 71. S.S. 64.)

Oct. 19. Wednes. to Nov. 6. Our George is now twentyseven years old, with a good business here as proprietor of the O.K. livery stable and Veterinarian. I have been obliged to skip my daily writing between the two above dates on account of sickness, but by the loving kindness of the Lord, I can now sit up a little while each day and resume my accustomed writing. On the first date above mentioned, I went to bed with some fever, and on the following Mond. morning early I had an attack of spasmodic choking which came near ending my life. Had not my dear Theresa been right here at hand, no one can tell what the outcome might have been. George ran for Dr. Barbour and I was kept under the influence of chloroform for more than an hour, in order for me to get my health. The trouble seemed to be in my throat, and somewhat resembled the choking of whooping cough. It was indeed a severe experience but out of it all the dear Lord brought me, so although yet quite make I yet live. And my